The EY Exhibition: Late Turner – Painting Set Free is the first major exhibition to survey the achievements of JMW Turner (1775–1851) during his final period (1835–50). The exhibition reassesses the extraordinary body of work Turner created during this period, including some of his most celebrated works, and opens at Tate Britain on 10 September.

The exhibition begins in 1835, the year that Turner reached 60, and closes with his last exhibits at the Royal Academy in 1850. It demonstrates how his closing years were a time of exceptional energy and vigour, initiated by one of his most extensive tours of Europe. Bringing together 180 works from the UK and abroad, it seeks to challenge assumptions around the idea of the ‘elderly’ artist, as well as his radical techniques, processes and materials during this productive time.

The show includes iconic paintings like Ancient Rome; Agrippina Landing with the Ashes of Germanicus exh. 1839 (Tate), which is united with its pair Modern Rome – Campo Vaccino (J. Paul Getty Museum, LA), The Wreck Buoy 1849 (National Museums Liverpool) and watercolours such as Heidelberg: Sunset c.1840 (Manchester City Galleries). Rather than focusing on any assumptions about the pessimism of old age, Turner maintained his commitment to the observation of nature. He brought renewed energy to the exploration of the social, technological and scientific developments of modern life, in works such as Rain, Steam, and Speed – The Great Western Railway 1844 (National Gallery). He also continued to engage with the religious and historical themes that linked him to the cultural traditions of his era. 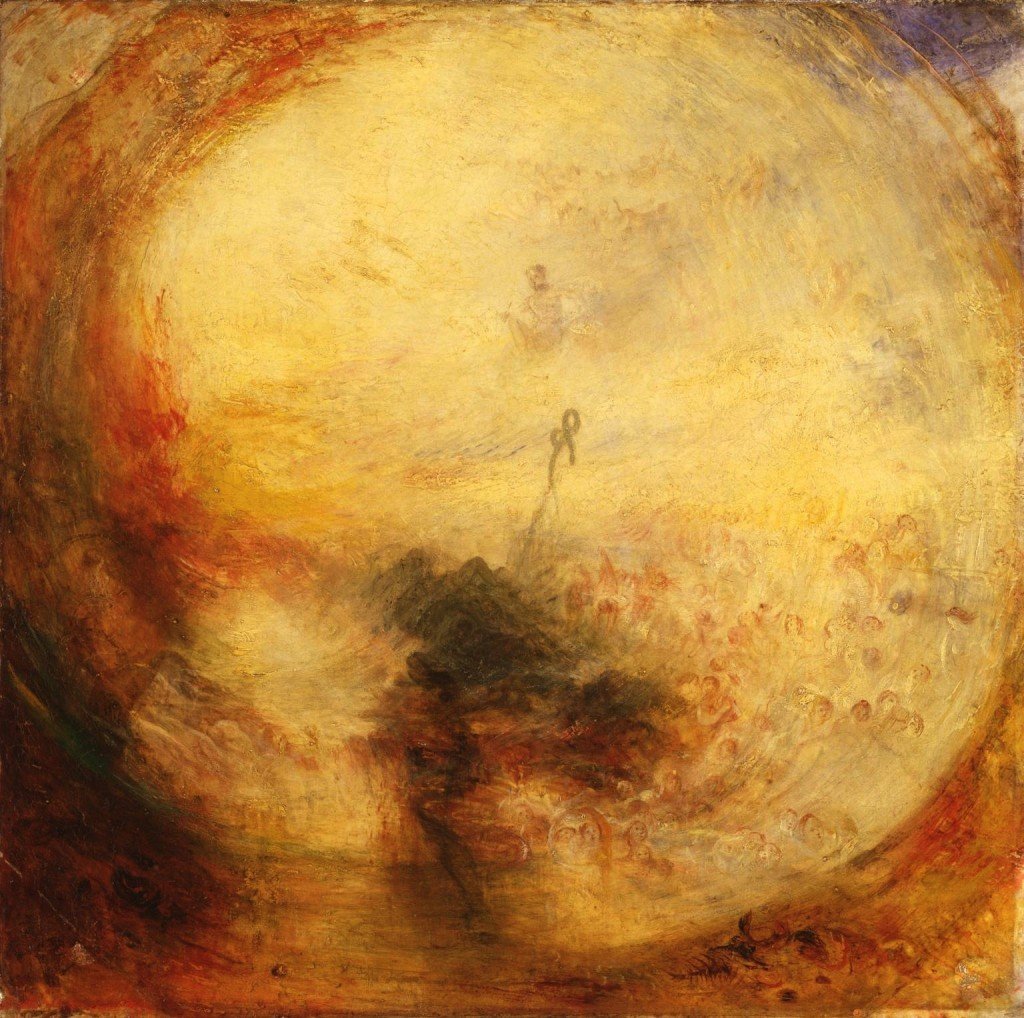 Featuring many large-scale oil paintings alongside drawings, prints and watercolours, the exhibition addresses Turner’s continual re-invention of his practice through experimentation with materials and techniques. It also demonstrates his radicalism during this period – while his Victorian contemporaries were exploring other priorities, he continued to champion an unfettered creativity. He consciously developed his style and technique with each new project, driving the message of his paintings into the very materials and formats with which he worked. These works were often poised equivocally between finished and unfinished, for example in a series of reworkings in oil of subjects originally published as prints in his Liber Studiorum.

During his final period Turner continued to widen his exposure in the marketplace. From pictures of the whaling industry in the 1840s to 'sample studies' and finished watercolours such as The Blue Rigi, Sunrise 1842 (Tate), he constantly sought to demonstrate his appeal to new admirers, led by John Ruskin who famously described Turner as ‘the greatest of the age.’

Joseph Mallord William Turner (1775–1851) was born in London, the son of a barber. He entered the Royal Academy Schools in 1789 at the age of 14 before becoming a member of the RA in 1802 and Professor of Perspective in 1807.  His work was prolific and varied including drawings, prints, watercolours and oils. Throughout his later years he continued to tour Europe, his last trip taking place in 1845. He exhibited his last four pictures at the Royal Academy in 1850 and died in 1851, his body being laid to rest in the crypt of St Paul’s Cathedral.