The Fed against the Markets

We all have been waiting for the Fed exiting the most aggressive easing program undertaken since its 100-year inception, embarked upon as a result of the worst recession since the great depression of the 1930s and finally start hiking the rates. However, the rate hike may not come as early as we expect as the low inflation and wage growth still show possible red flags in the current economic situation, even though the job market seems to be stabilized.

The FED finally dropped the patience line off its minutes, however the market reacted much different than majority of the traders and analysts initially expected. Surprise market move came after reports from the FOMC statement released on Wednesday showing the Fed downgrading its assessment of the economy, hinting on a gentler path to rate hikes, also lowering economic growth expectations for the year, as well as 2016 and 2017. Now, analysts expect the rate hike to commence in September compared to previous forecasts for June 2015.

Janet Yellen made it clear that the Fed is obviously weighing their options carefully. Having “patient” line dropped from their statement does not necessarily means that the Fed lost their patience too. The Fed Chair Yellen insisted that; “Just because we removed the word patient from the statement doesn’t mean we are going to be impatient” as the FOMC further clarified that tightening will commence only “when it has seen further improvement in the labor market and is reasonably confident that inflation will move back to its 2 percent objective over the medium term.” 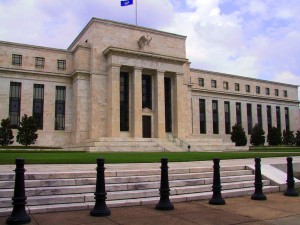 New Era for the Fed

The decision to drop “patience” from its statement marks the beginning of the end for the outright forward guidance policy which it had adopted since 2008 and marks the beginning of a complete new era. However, traders should be cautious as the Fed will evaluate every single element before they move on with their full plan. Hence, small instability could be expected in the market due to surprises presented by the Fed.

When everyone weighs on one announcement but the Fed announce complete different scenario market welcomes this announcement as a shock wave. Hence, chaos hits the market, as we witnessed on Wednesday.

Any consumer economy needs proper wages for its workers

Should policymakers work outside London?