Despite repeated reports of its demise, manufacturing is responsible for more than half the West Midlands economy and nearly a third of the UK output, according to research for Birmingham City University.

The findings come as The Office for National Statistics yesterday hosted a major event on 'The Changing Shape of UK Manufacturing'.

The study by the West Midlands Economic Forum suggests manufacturing makes a 53% comparative contribution to the Midlands economy and contributes 30% to the UK as a whole.

The figures, based on estimates about the dependency of other sectors of the UK economy on manufacturing, was commissioned by the University and presented to a fringe event at the Conservative Party Conference last month. 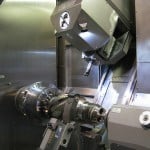 “It is clear we need to find better ways to really understand what is happening in the economy rather than relying on existing methods which appear less suited to providing the insights we need for the connected economy. Manufacturing is just not appreciated in terms of the talent we need to recruit or the context we use in discussing it.”

A participant in the event, Paul Forrest, Director at West Midlands Economic Forum, told the event that the current public debate failed to acknowledge the productivity of the West Midlands region. “Export performance in the West Midlands has grown by 30% in the last 2 years which, looking at productivity growth in accordance to Purchasing Managers Index, shows we’re outperforming people in Germany and China.