The Future of the Grocery Sector in the UK

The UK's grocery sector is one of the most competitive and cutthroat in retail.  It also risks being one of the unhealthiest, with demand flat lining and over capacity eroding the big players' profitability.  Against this backdrop of multi million pound price wars and investor concern, the KPMG/Ipsos Retail Think Tank (the RTT) met in April to discuss what may play out in the future.

What impact are the discounters really having on the UK's grocery sector?

The rise of the discount grocers has been heavily analysed, with some commentators portraying them as playing a leading role in reshaping the grocery sector, tempting cash conscious consumers away from the established brands of the British market.

However, while there is no doubt these discount brands have eroded the edges of the big four's market share and continue to do so, the RTT questioned how significant their effect has really been.   Despite recessionary-induced changes in shopping behaviour, the RTT believes it is difficult to see the big four's hold on the main grocery market being seriously challenged, simply because of their commanding (75%+) store network market penetration – a market share which has existed for almost ten years.

“Tesco and Morrisons are suffering because they are caught in the squeezed middle; discounters (not just Aldi and Lidl) are chipping away from below and Sainsbury's, Waitrose et al are digging down from above, albeit post-Christmas figures suggest Sainsbury's is now beginning to suffer too. The underlying problem ultimately is the continuing household income squeeze. And the danger that the new-found consumer parsimony will become a permanent feature of the market even if economic growth is sustained.” 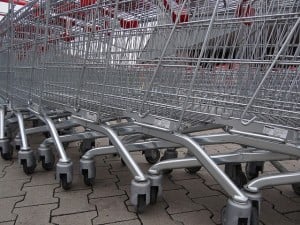 The price war between the grocers has been well trailed in the press, with Morrisons announcing in May that the average price of their everyday essentials will fall by 17%.

The RTT believes that the price war between the major grocers may offer some short term gains for consumers, but it won't deliver the shift the average shopper actually wants in terms of service levels and convenience.  The latest discounting also fails to give the big four grocers a competitive edge over the discounters, who offer low prices all year round.  Indeed, it could play into their hands as consumers may not trust a spate of lower prices than offered yesterday.

The RTT warns that the price war could damage the sector's prospects for attracting investment in the future.

“The big UK supermarkets have been dismal investments on the stockmarket for some time now and share prices remain under pressure, despite the attractive dividend yields now available on Tesco, Morrisons and Sainsbury's. Equity investors are clearly worried about the impact of declining industry sales volumes and declining gross margins on near-term profitability.”

“The immediate threat to three of the big four is their potential inability to invest in the changes needed to move with the marketplace. With profit levels falling, the declared price cutting schemes and low volume sales, these grocers are becoming less attractive to investors, witnessed by the £2.8 billion wiped off their market value amidst fears of full-blown price wars. Retailers need to compete on their own strengths, not those of their competitors. The promise to consumers of lower prices will prove to be nothing more than a race to the bottom of the premier league.”

The RTT believes that the real danger to the grocers is the steady decline of the weekly shop, which could render out of town hypermarkets, a significant chunk of retailers' real estate operations, obsolete.

“The way we buy our groceries has changed, with many consumers favouring a bulk online order for key staples and supplementing this with visits to convenience stores during the week for fresh goods.  This has shifted the emphasis away from hypermarkets and spells trouble for the mainstream grocers.”

These changes in our shopping habits mean that the grocers' property portfolios risk becoming no longer fit for purpose, as consumer trends outpace their long term development plans.

Richard Lowe, Head of Retail and Wholesale at Barclays said:

“Grocers need to question how much space they need to keep pace with online growth. If more consumers switch from visiting bricks and mortar stores to the virtual world, grocers must consider how fast or slow this rate of growth is when planning their expansion strategies.  As convenience stores and online shopping continue to grow, the question grocers will be asking is what do they do with the footprint they have in the larger stores.”

“Many large stores could be refitted to become click and collect or home delivery hubs.  This could prompt the rise of 'drive through shopping', the ultimate choice for the time constrained consumer.

“However, it's not as simple as moving some shelves around and re-designating use.  Omni-channel grocery can dilute margins if not done effectively.  It is a service enhancement for the consumer, but won't necessarily benefit the retailer unless the consumers using the service buy more than those just choosing to shop in store.”

The RTT believes that the shift to convenience shopping has been driven by the industry itself, rather than consumer demand, after grocers opted to open smaller high street sites to quickly gain a foothold in towns where they were underrepresented.  Consumers have embraced convenience stores and 'top up shopping' so enthusiastically that the grocers have seen sales in their large format stores decline, cannibalised by smaller stores on the high street.

“Property investors seem very relaxed about long-term prospects, as rental yields remain quite firm, implying that there is no doubt about the future cash flows from well-located supermarkets and their ability to pay market rents.”

But is this untrammelled expansion sensible?

“In the future it is unlikely that demand will pick up in any meaningful way. It is also unlikely that capacity will moderate or decline. Although from a sector point of view it makes little sense to bring on more space, from an individual retailer point of view it is eminently logical to expand and grow in areas where a chain is underrepresented. What this means is that the long-term financials of the sector are and will remain less healthy than they were ten years ago. This is an economic shift in the model of the industry.”

What's next for the sector?

The modern consumer wants a cheap, ideally free, online shopping service, with long sell-by dates and no substitutions.  This is the golden chalice of grocery, but the cost of delivery is a major barrier to grocers and consumers.  Whether grocers with significant property estates will ever strive to provide this level of service is debateable.  However, the RTT believes consumers may embrace 'drive through' shopping, where consumers can quickly pick up their preordered shopping at a location convenient to them.

“The cost of home delivery still puts many potential consumers off along with worries about the products selected by the packers. Greater emphasis on quality may help, but for higher value meat/fish products we could see individual photos or more specific information to allow customers to get better choice.”

However, the economic reality is that it's not in the interests of the big four to move quicker towards on-line sales and home delivery, irrespective of whether the demand is there.  The costs of the online sales and homes delivery model remain fiercely prohibitive.

The arrival of the online rival

The RTT believes that price alone or a competitive environment will not reshape the grocery sector whilst all the players keep using similar formats.  Instead, a new entrant could change the balance.  This could take the form of a new online only retailer like Amazon entering the fray, or price comparison websites playing a greater role in the market.  It is inevitable that this change will be greatly accelerated if a big grocer fails.  This would leave room for new market entrants to come in and offer consumers something different.

“It's possible we could see third party companies like price comparison websites providing services to pick products from different grocers to guarantee the cheapest weekly shop. As a result, we may see grocers focus more on their own branded products, which are more difficult to compare.

“Such third party organisations could boost opportunities for smaller retailers offering locally sourced food or ethically produced items. Conceivably, we could see the manufacturer of the product or the farmer sell through Amazon, further diminishing the need for a traditional supermarket. All in all, advancing technology will offer greater choice for customers, but present huge challenges for the established sector leaders.”

“We may see the demise or disappearance of one of the majors over the coming years but, unless there's a change in approach, I would expect them to be quickly replaced by new entrants with ambitious expansion plans.  We could end up with a Big Six or Seven occupying the market with more evenly spread market shares.  However, if there is a seismic shift, caused by a new online player or a market failure, then brand will become the decider in this battle.”

“The competitive advantage Amazon has is that they know a lot more about their customers than the traditional grocers.  If they can find the right local partner and target just the top 5% of customers in the UK who could deliver the majority of their sales, then this could be a game changer.  Despite the wide spread use of patronage and loyalty cards by consumers, supermarkets have failed to reap the benefits of the data and insight these offer to them.”

New market entrants and changing consumer buying habits have left the UK grocery market in a state of flux, and the RTT warns that the majority need to reconsider their long term strategy and assess if it is still fit for purpose.

The rising popularity of buying staple goods online and topping up at the nearest convenience store risks rendering the average out of town hypermarket obsolete in its current form, and these need to be reconfigured to reflect the rise of click and collect and the falling sales of non food items.

The discounters aren't the slayer of the big four, but they have piqued the interest of a UK consumer bored with the middle ground brands and keen to make their money go further, whilst buying food and products they can enjoy.

However, the current status quo would only be at risk if one of the big four were to disappear: in order to gain significant market share the discounters will require a stratospheric store opening programme or the failure of a competitor.  The RTT believes the answer to securing sales doesn't lie on a price tag, but in strong product ranges tailored to the local market's tastes alongside delivery options, charges and times to suit the consumer.  If a grocer can work out how to offer free home delivery, with no substitutions, products with a long shelf life and exact delivery times then they will pull ahead of the pack.

If a well-financed player can find the right supply chain model and partner in the UK to deliver its online grocery model service then this could be a pivotal moment in the history of UK grocery, and completely change the face of UK retail.

Either way, the old blueprint for a UK grocer is out of date and radical investment in store infrastructure, online delivery and click and collect is urgently needed if the grocery sector is to deliver the service the modern consumer demands.

Mortgages – Interest Only or Repayment?

Why Investors Are Piling into This $3.5-Billion Tech Stock with No Revenue…