After a three-month display, The Gallery Of African Art’s most recent exhibition, ‘The Power Of One Woman’ will be finishing on 6th Feb 2016

The Gallery of African Art (GAFRA) exhibition 'The Power of One Woman', shows the art of the internationally acclaimed Nigerian artist Chief Nike Davies-Okundaye. Featuring early pen and ink works, delicate watercolours, jewellery and Adire textiles, this exhibition provides the audience with a rich body of work from a consistent and dedicated practice which spans over 40 years. This exhibition also showcases never-before-seen photographs by Joanna Lipper, revealing new, groundbreaking dimensions of Nike's multi-faceted identity as a Yoruba Chief, daughter, mother, wife, artist, teacher, and social entrepreneur. 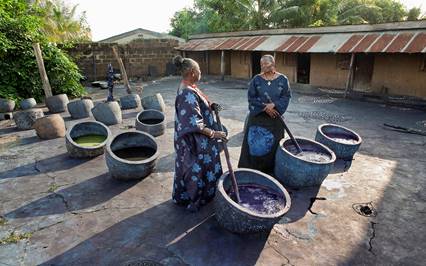 Guided by creative ingenuity, Chief Davies-Okundaye has received numerous international recognitions for her role in elevating Adire – an indigo-dyed cloth produced by Yoruba Women in Southwestern Nigeria – into an art form, and is credited with the contemporary revival of Adire. Her dynamic compositions embody new and traditional techniques and pioneering new ways of printing onto the indigo-dyed cloth.

From fabric to paper, through engaging ancestral symbols to capturing the spirit of modern life, Chief Davies-Okundaye’s works on textiles have illuminated her paintings. These symbols are not merely decorative; each one embodies a narrative – imparting caution, giving counsel or offering praise – all of which are attributes of the artist herself. Through the Nike Arts Centre, Chief Nike imparts the wisdom she has learned from her life experiences freely to those who seek reassurance – elevating the disadvantaged by empowering them through the discovery of their own creativity.

Highlights of the exhibition include works from the Feminine Power Series which range from an early monochromatic pen and ink work to dynamic yet intricate works in blue acrylics. One of the works in this series Feminine Power, 2002 made in conjunction with her long time collaborator, Tola Wewe, is on loan to the British Library for their current exhibition West Africa: Word, Symbol, Song. The exhibition also showcases 3 large-scale beaded wall sculptures.

Joanna Lipper first photographed Chief Nike Davies-Okundaye in Oshogbo, Nigeria, in 2010, resulting in a series of portraits that are riveting and arrestingly beautiful in their depiction of feminine power, resilience, psychic integrity and spiritual faith. Lipper, an award-winning filmmaker and photographer, explains, "Through this series of images, I was striving to illuminate Nike’s dedication to the preservation and transmission of traditional Yoruba belief structures, art techniques and visual vocabularies to new generations, along with her own internationally influenced, progressive thinking when it comes to securing Nigerian women’s rights and economic autonomy through the practice of these enduring art forms.  My photographic process incorporates a digital camera, the creation of a colour negative and traditional darkroom printing techniques, echoing the interweaving of past and present that conceptually shapes my approach to photographing women whose lives are shaped by the tension between patriarchal traditions and encroaching, progressive modernity when it comes to defining gender roles in Africa."

Chief Nike Davies-Okundaye was born in 1951 in Ogidi-Ijumu, Kogi State, Nigeria. She was brought up amidst the traditional weaving and dyeing practice in her native village of Ogidi in Western Nigeria. Chief Nike’s artistic skills were nurtured at a young age by her parents and great- grandmother, who were musicians and crafts people. She spent the early part of her life in Oshogbo, which is recognised as one of the major centres for art and culture in Nigeria. During her stay in Oshogbo, indigo dyeing and Adire production dominated her informal training.  Chief Nike is the founder and director of four art centres which offer free training to young artists in visual, musical and the performing arts. She is the owner of the largest art gallery in West Africa, comprising over 7,000 artworks. The centres also serve as a rich source of knowledge for traditional arts and culture to scholars and institutions. Chief Nike is known all over the world for promoting her designs through exhibitions and workshops in Nigeria, USA, Belgium, Germany, Austria, Italy, and the United Kingdom. Her works are held in major institutions and private collections around the world.   Chief Nike lives and works in Lagos, Nigeria.

Joanna Lipper is an award-winning filmmaker, photographer and author.  Her debut exhibition as a photographer in London opens at the Gallery of African Art (GAFRA), featuring never-before-seen images of internationally renowned Nigerian artist, Chief Nike Davies-Okundaye.  These portraits were originally photographed as part of a larger project that she has been working on since 2009, Women @ Work in Africa, which includes photographs of diverse African women and girls engaged in farming, politics, sewing, cooking, art, fashion, religious observance, academic study, social entrepreneurship, activism, family life, street life and the market.  Joanna Lipper’s most recent award-winning documentary film, The Supreme Price, was about women and the pro-democracy movement in Nigeria.  As a Lecturer at Harvard (2010-2015), Lipper has been teaching Using Film For Social Change in the Department of African and African-American Studies.  Joanna is based in London.

Saved for the Nation

Is X factor a rot to our culture?

The Artist – stars of the silent screen