The Government is taking from the working poor to give to the wealthy, says TUC

The research analyses the combined impact on annual incomes in 2020 of changes due to be made to universal credit, benefits, the minimum wage and tax allowances. It also includes gains from the Chancellor’s planned increases to the minimum wage.

This type of distributional analysis was included in every Budget across the last parliament, but it was excluded from the Chancellor’s July Budget. It looks at the average impacts across all households in the UK, including pensioners, of changes announced in the Budget. It also looks at the impacts by whether or not households have work. 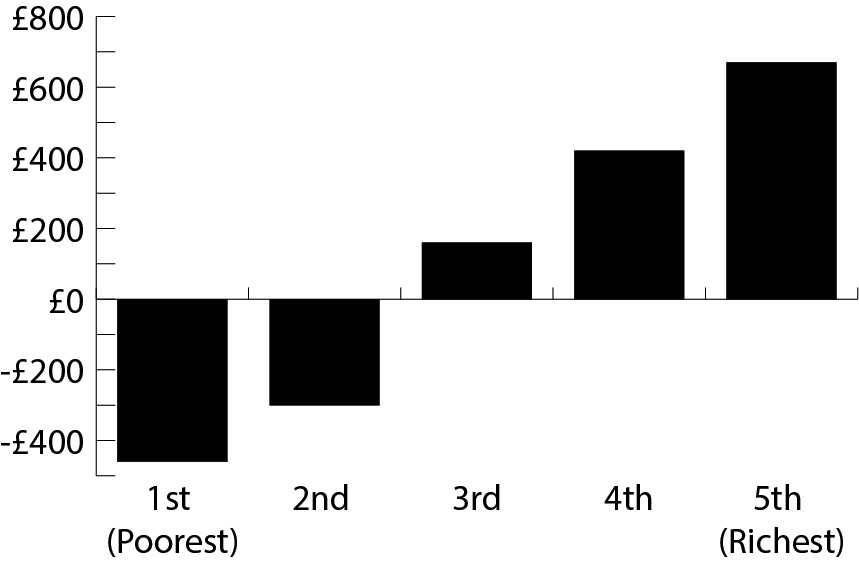 Working households in the middle of the spectrum make a small gain on average, but it is much less than the average gains that the wealthiest stand to receive.

The difference between the top and the middle shows up even more starkly in the decile analysis for all households, which shows that the average annual gain for the top decile in 2020 (£780) is twenty times the average gain for the fifth decile (£40).

The average weekly gain for the wealthiest working households (£12.88) is enough to buy a bottle of champagne each week, with plenty of change left over (Comte de Senneval Champagne Brut, £9.99 in Lidl).

Alternatively the average annual amount lost by low paid working households (£460) is equivalent to a year’s worth of school dinners (for one child at a cost of £2.50 per day for 190 school days).

The research also looked at the impact of the changes across non-working households. It showed a similar pattern of large gains at the top, minor gains in the middle, and losses for the bottom (although these losses are not as great as when only working households are included – see full research note for further information).

The analysis assumes that all qualifying households have been transferred from tax credits to Universal Credit by 2020. However, if the transition to Universal Credit is delayed, the poorest deciles will face even larger losses worth hundreds of pounds more each year because of cuts the government is making to tax credits.

The TUC says that the research shows that the government’s tax and benefit policies will redistribute from the poorest to the richest. This will worsen inequality and poverty – especially in-work poverty.

“Even after the extra help from a larger tax allowance and a higher minimum wage, low paid families will still be made more than £8 a week worse off on average by 2020. And if Universal Credit is delayed, leaving families still on tax credits, their losses will be hundreds of pounds a year more.

“David Cameron needs to explain to low paid families why he is cutting their income by the same amount as a whole year of school dinners, but he’s giving the richest a cash boost worth a bottle of champagne every week.

“We need a recovery that works for everyone, not just those at the top. But by cutting support for low paid families, despite a growing economy, the government is shutting them out of the recovery. And worse than that, it’s also giving rich households a tax break by taking support away from the low paid.

“Not only is this unfair, but it’s bad economics. We need more money in the pockets of low paid families so that they can get out and spend it in their local businesses.”