The great inflation and growth myth

Unless you have been living abroad for the past few years, you will probably have noticed that the Monetary Policy Committee (MPC) has not done a very good job of hitting the inflation target. Since CPI inflation was last below the 2% target in November 2009, it has subsequently averaged 3.5%. RPI inflation has averaged 4.3% over the same period.

Inflation, in general, is not great. It erodes the value of nominal savings and debt, thereby acting to redistribute wealth between creditors and debtors. If it seriously gets out of control it can spiral upwards, and require painfully tight monetary policy in order to get the ‘inflation genie back in the bottle’. One other thing it is often criticised for is hitting growth.

It is certainly true that higher inflation can hit the purchasing power of households’ take-home pay. As such, it can weigh on consumption and activity. One particular claim that is often rife in newspapers of a certain type (you know who they are) is that, if inflation had been lower, growth would have been higher. For example, nominal (cash) GDP growth in 2012 is likely to have been around +1.8%; but, after taking account of inflation, real GDP growth was zero. Lower inflation, therefore, would have meant higher growth – if we’d have had no inflation at all, the economy would have grown by almost 2%.

While this sounds plausible, it is in fact nonsense. The only way this story would be true is if we rely on a critical assumption. In the Latin economics jargon, this assumption is ‘ceteris paribus’ – in English, ‘all other things being equal’. When we conduct the thought experiment above, we are implicitly assuming that nominal GDP growth would still have been 1.8% last year, even if inflation was zero. 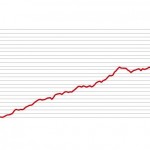 There is no sensible reason to make this assumption that nominal GDP would be unchanged, but it is often lurking in the background of these sorts of discussions around growth and inflation. It may in part relate to the way real GDP is calculated, as a deflated version of nominal GDP. But it is simply wrong. Most (sensible) modern monetary economists accept that only real variables affect the real economy, and hence the impact of inflation may be at best indirect, via backward-looking real interest rates (nominal rates minus inflation). Furthermore, there are lags between the real factors that determine GDP growth and that growth itself – so a change in the real interest rate will not affect GDP straight away. There is then another lag between conditions in the real economy feeding through to inflation, meaning that the pattern of real growth and price inflation in any given period will reflect different shocks at different points in time feeding through the economy with different speeds. This is, fundamentally, why economists spend time building models. And the (admittedly uncertain) evidence we have from using these argues very strongly against assuming that nominal GDP will be unchanged come what may as inflation and growth change.

Next time you read commentary on inflation hampering growth, perhaps just stop and think – is the author assuming that nominal GDP would still be the same to make their argument? If so, beware falling for the great inflation and growth myth.