The planet is under threat from aliens and demigods alike as the fabled god of mischief, Loki (Hiddleston), threatens to harness the power of immortals, unleash an alien invasion and enslave mankind in the latest comic book adaptation to hit the big screen.

As events quickly unfold, it is left to secret agent Nick Fury (Jackson) to persuade a unique group of individuals to overcome their differences and become The Avengers.

Alongside specialised agents Natasha Romanoff aka Black Widow (Johansson) and Clint Barton aka Hawkeye (Renner), it is left to Earth's mightiest heroes to save the day.

As the Marvel universe and its associated heroes exploded onto the publishing scene in the early Sixties, head honcho Stan Lee and his team of writers and illustrators cleverly ensured that their creations did not exist in isolation but rather that the cast contained in the pages of the fictional universe frequently crossed over between titles.

Half a century after The Avengers made their debut, the publisher has gradually grown as a major production studio with a succession of stylishly filmed superhero movies gradually prepping audiences for the ultimate on screen mash up.

Kenneth Branagh's theatrically inspired mix of high drama and pop culture set the scene for some seriously troubled sibling rivalry as the heavens shook with Chris Hemsworth's brave but arrogant thunder god and Tom Hiddleston's embittered and mischievous Loki clashing for the first time in Thor (2011).

It's a daunting prospect bringing together several movie franchises to form what should amount to the Citizen Kane of the superhero genre but Marvel certainly chose well by entrusting Joss Whedon to pull out all the stops whilst paying due respect to the work already undertaken by the previous directors.

Whedon has a knack for producing character driven adventures both on the illustrated page and the screen whilst the film maker manages the near impossible by ensuring that the majority of his huge cast have their moment in the spotlight.

The director never loses sight that the heart of his gigantic comic book spectacle is not necessarily the bashing of an invading alien army but rather the bonding together of a group of dysfunctional and larger than life characters whilst the ridiculously epic science fiction premise is often offset by moments of witty banter and character interaction that allow the viewer to suspend disbelief.

Johansson and Renner are also given time to expand on the cameos featured in the previous movies as Black Widow and Hawkeye hint at a close professional bond and emerging friendship that may well be further explored in future instalments.

Clark Greggs's Agent Coulson also makes a welcome return and his moment of hero worship upon meeting Captain America is a wonderfully conceived and almost cringe worthy comedy moment whilst Jackson's head of operations is allowed to finally burst into action and not just sell the initiative to his reluctant recruits. 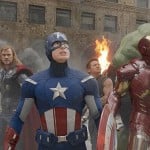 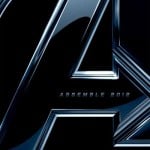 Tom Hiddleston's embittered god of mischief is more venomous than previously encountered with Loki emerging as a much more desperate and trigger happy villain second time around.

Perhaps someone had to take a back seat in such a large spectacle and the alien army thrust onto the Manhattan skyline fail to linger in the memory and serve primarily as the inspiration to bring the team together as a fighting unit.

Cobie Smulders is also quite often relegated to manning the bridge in the deputy role of Agent Hill as Jackson's Fury needs little excuse to join in the action.

No doubt these characters seem destined to be examined in future outings and Whedon cleverly holds back his ace until the half way stage as Ruffalo's quietly tormented Bruce Banner gives in to his gamma radiated alter ego and The Hulk virtually smashes up the entire screen.

Industrial Light and Magic have done wonders with the current incarnation of the not so jolly green giant with the added value that this animated Hulk actually resembles Banner whilst emitting a believable range of emotion and humour beneath his turbulent demeanour.

But perhaps the best compliment that can be given to the director is that the movie ultimately feels and plays out like the actual comic books you remember from yesteryear. Nuff said.

Whedon has delivered a brash and highly enjoyable slice of escapism that may well be the biggest superhero movie of them all. Recommended.