With all the 'disappointment' and surprise surrounding the UK's slip back into recession you would think that no-one had seen it coming.

But the Green Party's economics advisor Dr Molly Scott Cato did see it coming though, even as all the other parties were backing cuts but just arguing about by how deep they should be. Molly argues that cuts are hurting not helping.

In her piece 'A Green Paradox of Thrift' (economicvoice.com/forums/showthread.php/10086-A-Green-Paradox-of-Thrift?p=10513#post10513) penned for the party a couple of months ago she points to Keynes who noticed that when looking at the economy as a whole the natural response of cautiousness during economically difficult times could actually make the problems worse.

This is particularly the case when looking at how politicians conduct their business, especially at a local level.

Molly argues that politicians are looking at the 'economy' in the wrong way. They see council or government spending as an 'expense' that must be minimised. For many politicians who have run businesses cutting back on these expenses would seem to be the logical and understandable thing to do as it is exactly what they would do for their own business.

But the problem, says Molly, is that when making cuts you should understand the 'boundaries' of your business. For a small business this is relatively easy to define and understand. But when dealing with local government for example, your business boundary encompasses all the businesses and household etc within the local economy.

Any money that is spent within the local economy should therefore be looked at as an income, rather than as an expense. What politicians should be doing is minimising leakage from the local economy, not strangling spending within it. 'To cut your own budgets to the bone, or not to spend money budgeted in this period, is like cutting your own income rather than cutting your own outgoings,' she says.

By cutting back on local and central government spending within the 'boundaries' we are adversely affecting the circulation of money she says. This then leads to shrinkage, a lower tax take and a growing deficit (sound familiar?)

Molly claims that government spending could generate a 'virtuous circle' with local government acting as a 'positive multiplier' stimulating local economies as money is spent, re-spent and taxed.

'At the moment' she says 'we are seeing the reverse effect – both national and local governments cut spending and this reduces their spending with businesses and reduces the revenue they gain from businesses. This happens when councils cut jobs, so, as a key local employer, the decision many local councils have taken to cut their staffing levels will inevitably reduce spending by their employees in the local economy.'

This is the realm of Danny Blanchflower's 'death spiral' she says.

But it doesn't end with councils just spending more. There is, as you would expect, a 'green' element that must always be considered, especially in our very finite world. 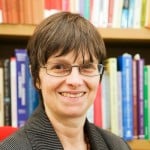 We are also boxed in by an environmental crisis she says and must also be thrifty with our resources. In the past we just consumed more, which was OK until we hit the ecological buffers. But now that we have Our duty must be to become ecological citizens, to prioritise happiness founded on relationship and virtue rather than on material acquisition.

To dos this she says, we must learn to acknowledge our ecological limits and rely on local rather than global multipliers.

It may seem paradoxical but in fact it is entirely consistent to pursue an economic strategy that acknowledges the paradox of thrift while simultaneously arguing that we should learn to flourish within ecological limits. What a green economist would aim for is the substitution of local economic activity for global economic activity.