Taking over not just Hoxton Square, but also museums, shops, cafés and bars, the festival features a series of masterclasses in skills from preserve making and flower arranging to wood turning and home brewing – each led by talented volunteers aged 70 and over. Organisers, Royal Voluntary Service, have been overwhelmed by the response, prompting anticipation that GrandFest may become an annual event.

Between masterclasses, in the GrandFest hub of Hoxton Square, festival goers will be treated to a range of food and drink stands, a pop-up shop and the GrandFest stage, where performers such as Claremont Dancers, Bella Donna and Swing Patrol will entertain the crowds. 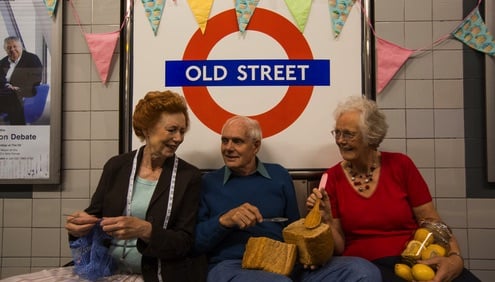 Celebrity Garden Designer and TV Personality Dermuid Gavin, will be hosting a masterclass on potting and planting.

Diarmuid says "I am a huge supporter of Royal Voluntary Service and I'm thrilled to be part of such an exciting event like GrandFest, which celebrates the skills of older people. I really enjoyed my masterclass in and was so proud to be alongside the other GrandMakers.”

Jessica Becker, 24 from London, who has booked into the bread-making class says “When I heard about GrandFest I thought it was such a cool idea, I love the idea of learning something from older people. I booked the class with Clive as I’m not very confident in the kitchen, but I eat loads of bread – so it seems like a great choice.”

David McCullough, chief executive at Royal Voluntary Service, said: “We’re overwhelmed with the levels of interest today – it’s been an absolute testament to the respect and admiration we all have for the incredible skills of this talented group of over 70s. Seeing young people travel here from across London and beyond to join a masterclass speaks volumes. GrandFest has just been a snapshot though. So many of us know a skilled and talented older person from whom we can learn and who we should encourage to keep going with their hobbies. Pastimes are a vital way for older people to stay sharp and active.”

A full round-up of the day can be found on the website: http://grandfest.royalvoluntaryservice.org.uk/

Refurbished Gallery Reopens to the Public