Are politicians guilty of using the prisoners' right to vote issue to just pander to public opinion and boost their own popularity?

The Members of the Palace of Westminster know full well that they have no real control over this issue.

Whether they like it or not prisoners will get the vote via the EU legal system in the end.

The argument the EU uses is that the right to vote is a fundamental human right.

Article 21 of the The Universal Declaration of Human Rights (UDHR) states:

1. Every citizen of the Union has the right to vote and to stand as a candidate at elections to the European Parliament in the Member State in which he or she resides, under the same conditions as nationals of that State.

2. Members of the European Parliament shall be elected by direct universal suffrage in a free and secret ballot.

These are human rights that no-one can take away. That is what a human right is. Anything else is just a temporary privilege.

* (1) Everyone has the right to freedom of movement and residence within the borders of each state.

* (2) Everyone has the right to leave any country, including his own, and to return to his country.

And the EU document Article 45:

Freedom of movement and of residence

1. Every citizen of the Union has the right to move and reside freely within the territory of the Member States.

2. Freedom of movement and residence may be granted, in accordance with the Treaty establishing the European Community, to nationals of third countries legally resident in the territory of a Member State.

Does this mean that imprisonment is also against human rights legislation? Will this also in time become a target area for activists?

When the UDHR was written in 1948 it was to designed to become the ' .... common standard of achievement for all peoples and all nations …. '. 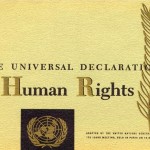 Human rights are exactly what they say they are and are enshrined in these documents. No allowance is made within them for these rights to be removed. If they can be removed then what you are saying is that they are not fundamental human rights. Or that the people they are taken from are no longer human.

Politicians may argue that convicts have broken their 'contract with society', but this then means that we in the UK do not believe that voting is a human right. We believe it to be a privilege that can be removed. But instead of explaining this to the voters the politicians prefer to grandstand in the full knowledge that this is one subject they can scream about from the rooftops, vote to please the electorate but not then be held accountable.

When people, politicians and nations sign up to forge the ideal world but the only material they have to work with is flawed humanity then you are always heading for conflict like this.

The crawl of the makers