George Clooney returns to the director’s chair with a political drama that no doubt hopes to repeat the critical success of his previous directorial efforts Good Night, and Good Luck (2005) and Confessions of a Dangerous Mind (2002).

Adapted from the Beau Willimon play Farragut North, the political melodrama focuses on Stephen Myers (Gosling), a bright young thing and upcoming spin doctor aiming to ensure that presidential candidate Governor Mike Morris (Clooney) is sworn in as the next President of the United States of America.

With the canvassing in full swing, Myers idealism is thrown into doubt as both an offer from the opposition and a revelation concerning the personal affairs of his candidate causes the spokesman to examine his own motivations, resulting in a course of action that may have consequences for all involved on the campaign trail.

The theme of a young idealist given a shot at the big time and having his own moral code blown away by the harsh reality of the political arena is not a new concept to Hollywood nor is the backdrop of the circus environment and media frenzy that continues to engulf each successive presidential or senatorial campaign.

The subject has been examined previously on film with notable examples including Robert Redford in The Candidate (1972), Jeff Bridges in The Contender (2000) and even Henry Fonda and Cliff Robertson slugging it out in The Best Man (1964).

The examination is continued by Clooney who investigates the fallout when personal idealism clashes with political reality whilst the blind faith of Myers (Gosling) in the ethics and policies of his candidate is initially captured by Clooney who virtually removes his own character from the frame during the first twenty minutes of the film.

Not only do we witness the young campaigner robustly affirm the policies of the Governor in his screen absence but Morris is initially viewed from afar as speeches are partially heard as part of a broadcast, caught from the back of an arena or even captioned on an electoral banner or poster.

By elevating Morris onto a pedestal so early in the film, Clooney ensures that the revelation concerning the Governor will truly seem to shake Myer to the core and add some substance to the self doubt and examination undertaken by the character in the latter stages in the film.

Paul Giamatti and Philip Seymour Hoffman add to the atmosphere as the two heavyweights behind both camps, each attempting to out think each other with the one goal of ensuring their man enters the White House.

No one is immune to personal sacrifice and each actor manages to portray the seasoned campaigners as lonely aged men sold to the cause and the bigger picture whilst eschewing normal lives. 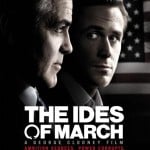 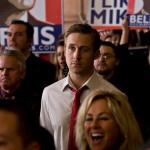 The earth shattering revelation concerning Clooney’s candidate may seem to move the film from an absorbing examination of political spin into the realm of melodrama but the truth is that many who live in the public gaze are not immune to moments of madness or indiscretion that come to define if not wreck a career, even Presidents.

Elsewhere, the cleverly Caesar inspired title along with a film score that encompasses a military drum roll that would not be out of place in an execution hint at the political back stabbing and betrayal to follow as each character fights it out for their political life as the polls indicate a close finish and unsavoury revelations are unearthed.

Gosling manages to centre the entire film with a captivating performance that witnesses his talented spin doctor journey from a cleverly astute idealist through to a political has been who rises again with vengeful intent.

The range of emotions needed to hold the attention of the audience are superbly captured by the actor and more importantly drive home the themes examined throughout the film.

the film enters it’s end game both Clooney and Gosling ensure that the true motivations of Myers are kept vague with the young campaigner not only in a position to bring the house down on the Morris campaign but also potentially emerging as the new power behind the throne.

Which will he choose?

Suffice to say the ending is a killer.

A taut and intelligent morality play that examines the conflict between personal idealism and political realities, Clooney delivers another high brow and absorbing picture but the moment belongs to Gosling with a truly riveting performance.