The IMF’s true verdict on the UK

Once a year, the UK economy gets a health check from the IMF. The process behind this so-called ‘Article IV’ assessment involves IMF staff meeting with officials from the Treasury and Bank of England, thinking seriously about the major issues facing the economy, and coming up with serious analysis about the challenges and potential policy prescriptions that should be considered.

After all that, it gets massively edited for political sensitivity.

Casual observers of the IMF press conference yesterday – for instance, those who caught a glimpse on the news – may not fully appreciate the constraints that Managing Director Lagarde, like her predecessors, is under. I can never remember a situation where the IMF MD was openly critical of a major shareholder (short of near-meltdown scenarios). The political realities of the IMF process mean that Osborne – just like Chancellors Darling and Brown before him – basically got to sign off on the statement that Lagarde gave. Sadly, the IMF’s Managing Director is rarely able to give an objective, independent assessment of major economies.

At the same time, much has been made of Lagarde’s shiver – a political gift to the Chancellor. To be absolutely precise, Lagarde made the point that, starting from the 11% deficit in 2010, if there had not been a plan to reduce the deficit then the consequences could have been severe. This is certainly true. But Lagarde’s statement was based on the hypothetical situation of there not being a deficit reduction plan in April 2010. In fact, then-Chancellor Darling had unveiled a deficit cutting Budget in March of that year which, as it has turned out, was arguably closer to reality than Osborne’s June Budget. Admittedly, Labour’s March 2010 deficit plan was sketchy – but so was Osborne’s June 2010 plan. It was only when we saw the Comprehensive Spending Review during the Autumn, when we found out exactly where the axe would fall, that the Chancellor really put the meat on the bones of deficit reduction (and credit to him for doing so).

All this suggests that, sadly, Lagarde’s comments may not be the best guide to economic reality. To get the real IMF view, we have to dig back into past comments and think more carefully about what was said.

First, in Autumn last year the IMF was very clear – if UK growth disappointed, and unemployment stayed high, the government should consider fiscal measures to kick-start growth. Cuts in national insurance and VAT, and proper infrastructure spending (rather than ‘leveraging private pension funds’) were all suggested. Since then, the UK has fallen back into recession and unemployment has barely budged. Due to her political constraints, Lagarde could not outright call for action now – but she did again emphasise that the Government needs a Plan B, even if it doesn’t think it will be required. One of the big lessons from the crisis is that intransigent policymakers – when the people holding the levers of power are unprepared to admit that they might have got things wrong – can significantly amplify the damage from economic shocks. I dearly hope the Government has a Plan B, even if it refuses to talk about it.

Lagarde was more vocal on monetary policy – she thinks the Bank of England should do more. Most interestingly, Lagarde called on the Bank to cut interest rates from their current level of just 0.5% to zero, and undertake more quantitative easing. She would also like to see the authorities properly go for credit easing – most easily accomplished by the BoE spending money on private assets rather than just UK government bonds.

This policy prescription is very revealing. First, an interest rate cut from 0.5% to zero will not provide much extra stimulus to the economy. And the BoE has been clear that it thinks 0.5% is as low as it can reasonably go without damaging the workings of the banking sector. In the past, the IMF has bought into this argument. So why is it calling for a rate cut now? 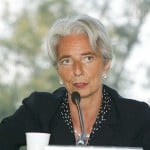 The implication is that quantitative easing hasn’t been as effective as either the BoE or the Fund expected. If QE had worked perfectly, there would be no need to talk about a further cut in interest rates (or credit easing, for that matter) – the Fund could just prescribe more gilt purchases. But if instead QE has been less effective at lowering ‘real world’ interest rates and bolstering confidence than policymakers confidently proclaimed, then we might have to look at other measures. The fact the Fund is calling for a 50bps cut in rates alone suggests that it is nervous about the impact of QE. Other independent studies also suggest that the impact might have been much smaller than the BoE has claimed, certainly once the initial surprise was out of the way.

The irony here is that, if monetary policy is not being particularly effective, fiscal policy may be the only lever left to pull. In principle, the BoE could try a different form of monetary stimulus (like not buying gilts!). But with Governor King refusing to countenance such measures, and Chancellor Osborne politically wedded to his ‘Plan A’ at all costs, the UK economy could find itself up the creek without anyone willing to paddle.

PS One of the odder things about the Government is that they seem less and less willing to debate economic policy. On Newsnight last night, we had Rachel Reeves from Labour and the Government’s Chloe Smith, both talking about economic policy. But Smith refused to debate with Reeves – so, instead, the presenter had to talk to them individually. Last month, we saw the same thing with Ed Balls and Danny Alexander – Alexander refused to debate with Balls.

I am a bit surprised by this. There are plenty of awkward things about our democracy, but the Government’s refusal even to debate with the opposition suggests strongly that ministers are running scared. For the life of me, I am not sure why – it is hardly as if Labour is trusted on the economy by voters. But it implies massive intellectual weakness. Running away from a debate is no way to win it.