On Monday George Osborne tried to repair his shattered reputation with a carefully-scripted piece at the Conservative Party conference. After the omnishambles of the Budget and the widespread acceptance that his fiscal plan has failed, the Tories’ answer to Lord Mandelson has been battered from all sides, not least since his friend and ally Andrew Mitchell allegedly started calling police officers ‘plebs’. But while Osborne was trying his best to convince people that he was still in control, the IMF was quietly pulling the rug out from under him.

Most economic commentators now accept that deficit reduction hasn’t worked. Osborne’s initial claims of being able to engineer an ‘expansionary fiscal contraction’ were quickly exposed, but at least – for the most part – he looked on track to get the deficit down as expected at the start. Unfortunately, the Chancellor badly underestimated the fiscal multipliers in the UK. Put another way, he did not think that his programme of spending cuts and tax rises would squeeze as much life out of the economy as they have done. Even conservative commentators have given up claiming that the deficit will be cut as expected now; the death-knell for the current plan was when BoE Governor King popped up on television saying it was ok if the Government missed its targets.

Given that deficit reduction is now off track (as well as economic recovery), Osborne trailed possible policy measures such as further welfare cuts and even vague suggestions that the rich could pay more tax. Such are the workings of the coalition right now, neither of these may come to anything. But he still insisted that fiscal policy should not be deliberately relaxed – there would be no move to ‘Plan B’, despite even right-wing columnists now widely musing about the benefits of infrastructure spending.

After skating around the issue very delicately for several years, the IMF has now finally called Osborne’s bluff. In its latest Fiscal Monitor, the Fund has called explicitly for Britain to relax its fiscal consolidation strategy if the economy remains weak. In this context, ‘weak’ would imply a sustained period of sub-trend growth (trend is around 0.6% a quarter, or 2.5% a year). Even though the economy should see a good growth figure for Q3 – reflecting the bank holiday echo, not the Olympics (to be fair, it was Cameron who got this one wrong) – there is little prospect of the economy expanding at trend pace from the end of this year.

It is quite rare for the IMF to be so explicit in its recommendations. Normally, the political nature of the institution means that its advice to its major shareholders – including the UK – is carefully phrased and nuanced, and often agreed in advance with the Treasury. The IMF’s relative bluntness this week both reflects its concerns about politicians’ willingness to deal with economic issues, and what it sees as the need for an impartial voice to call for what is needed. The IMF has finally lost patience with Osborne and his broken fiscal policy. 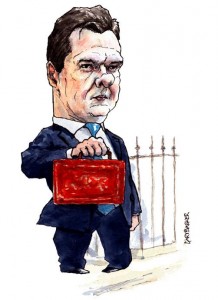 Unfortunately, it is unlikely to have much impact. As the tide of economic data and consensus views has shifted over the past 18 months, Osborne has looked increasingly alone in his assessment of what is needed. His grasp of economics was never that strong, but even he must know the famous quote attributed to Keynes (“when the facts change, I change my mind”). The problem is that our Chancellor has repeatedly invested so much political capital in his ‘Plan A’ that any shift now would destroy the scant remnants of his credibility. And because Osborne and Cameron are as close as ever, there is little prospect of someone else taking the reins.

Fundamentally, the politicians have got economic policy badly wrong. When even the IMF tells you to change course, that much is clear. But voters won’t be able to opt for a different approach for some time yet.