Ice cream is not such a ‘vanilla’ topic of conversation.  Actually, there are a number of interesting things to know about one of America’s favorite desserts.  Take five minutes, two scoops, and peruse the following information about the tasty world-renowned treat.

The exact origin of ice cream is unknown, yet some speculate rulers sentenced workers and slaves to gather nearby snow, later mixing it with honey, fruits, sweeteners and other fermented milk.

It’s estimated that Americans consume 20 quarts of ice cream per year.  That’s equal to five gallons of milk.  That’s a lot of dairy!

‘Vanilla,’ at times used to describe something bland or lacking zest, remains the favorite flavor of Americans.  About 30% of ice cream sales favor vanilla, with chocolate coming in at a distant second.

Using a large bowl and tub filled with ice and salt, ice cream was once made only by hand.  Called the pot-freezer method, ingredients were reduced by the mixture of ice and salt.  Latent heat brought the mixture to below the point of freezing.  Now, vendors and those enjoying at home have access to scores of ice cream packaging and associated supplies.

Industrial refrigeration (developed in the 1870s) did away with cut-and-store methods.  When the ‘freezer’ was perfected in the 1920s, mass production of ice cream took place. 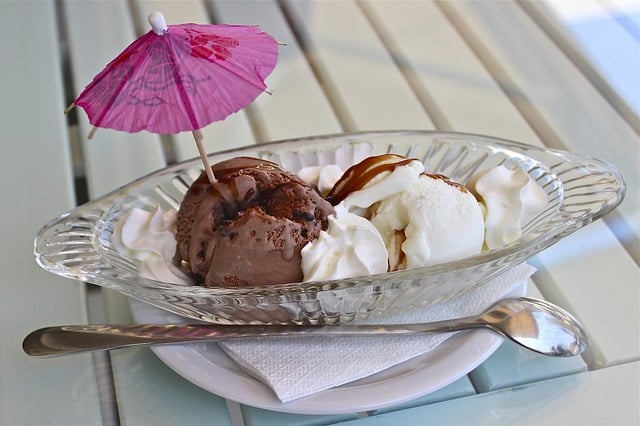 In the United States, ice cream has a composition of 10% milk fat, consisting of as much as 16% fat.  Other non-fat solids (serum solids) contain proteins and carbohydrates.  12 to 16% consists of sweeteners – a mixture of sucrose and glucose-based corn syrup sweeteners.
55 to 64% of ice cream is water, coming from the milk and other ingredients.

Based on 2009 statistics, ice cream sales exceed $14 billion, with sales unaffected by the recession.  Ice cream is not only a temptation of consumers; Sun Capital Partners purchased famous Friendly’s ice cream chain for over $330 million.

We all scream for ice cream, so it’s no surprise June produces the most amounts of ice cream (yet National Ice Cream day is in July).  The central region of America produces the most ice cream and related frozen desserts.
Ben and Jerry’s is one of the most popular vendors of consumers, featuring scores of memorable and obscure flavors like Rainforest Crunch and Devil’s Food Chocolate.

Varieties of frozen desserts are found throughout the world.  For example, sorbet is not to be confused with ice cream since it contains fruit puree rather than dairy ingredients.  Sherbet is sweeter than ice cream and contains 1-2% milk fat.
Snow cones, made from crushed ice and flavored syrup, is consumed throughout the world, but very popular in the United States, especially at amusement parks.

• It requires 12 pounds of milk to produce one gallon of ice cream.

• It takes an average of 50 licks to consume a cone of ice cream.  Don’t go too fast or you’ll get a brain freeze (otherwise known as an ice cream headache).

• Lore suggests the ice cream cone was invented at the 1904 World’s Fair when an ice cream vendor, running out of serving dishes, teamed with a waffle vendor who rolled the cream into the waffles.

Jesse is a lover of one of the top desserts in the world. From industry history to innovative flavors, he enjoys researching, tasting, and blogging about all things ice cream.

The Minuteman Crossword No2

Shopping for the Best Headphones for Airplane Travel? Here’s a Short Guide