The LibDem way will kill the UK nuclear deterrent

Apart from a direct move by the government to immediately scrap the UK's independent nuclear deterrent the LibDem approach of scaling down is the surest way of killing it off.

As many analysts have already said, in the current configuration the only sensible way ahead if we are to have a deterrent is a submarine based one.

The alternatives do not stack up to any sort of scrutiny.

The location of land based missiles would not remain a secret for long on the small area of real estate called the UK and so could easily be targeted by conventional enemies as well as terrorists. And anyway, who would allow armed nuclear weapons ready for launch to be housed on their doorstep without much protest?

An airborne deterrent would mean having the bombs or missiles at an airfield carrying the same risks as land based missiles together with the added risk of the flights carrying them going over built up areas. A no-no for any modern politician, however safe the system.

Surface warship-borne weapons cannot be carried covertly enough to be an effective deterrent.

As to weapons based in space, well the UK is definitely not in that highly expensive and technological game.

So submarines it is. But to be sure that you can hit a target virtually anywhere in the world with multiple warheads you need a ballistic missile system. Because cruise missiles, however well designed, can be brought down. The submarine required to do this is therefore necessarily large. And anyway, to get to their targets cruise missiles may well have to overfly other uninvolved possibly friendly nation states – good luck in trying to negotiate that if we need to use them in a hurry!

Now, running sufficient submarines, crews, warheads, missiles, maintenance infrastructure, weapons storage as well as an HQ, special codes, communications, targeting and firing chain expertise to maintain a Continuous At Sea Deterrent (CASD) is a very large and expensive programme. Then throw the question of Scottish independence into the mix, where the newly independent state would want the submarine base moved from the one place the deterrent can currently operate from.

So how beguiling it sounds in a time of supposed austerity when someone says that we can scale this back from four submarines to maybe two and run a sort of part time deterrent that we can switch on and off. You get the idea, we have a couple of subs and some missiles on standby, then if someone starts playing up we just send one to sea until the storm blows over and then home again for tea and crumpets.

But that's not how things play out.

A nuclear deterrent is a strategic beast, that means that it should be able to be maintained for a strategic period – that is decades. Just putting one to sea for a month or so fools no-one as it has to come back for maintenance at some time and only having two you could probably keep a round the clock deterrent going for a few months before its continuous nature was broken. And those few months are not going to be enough to build more subs, train more crews, obtain more missiles etc.

And don't be fooled into thinking that we would build up well in advance. Internal and external politics would make that extremely difficult if not impossible to achieve. Can you imagine the questions by international bodies, the European Union, other governments as well as politicians in Westminster all asking for time to negotiate before we started down that re-building route. Because any action to then increase our capability would be an internationally unacceptable and warlike move. And the state(s) that we were reacting to would just say that they are not a threat etc and many at home would be all too happy to believe that as they would not want to consider the alternative, preferring to remain in blissful ignorance. And trying to reconstruct covertly would be nigh on impossible.

Just consider, even sailing a nuclear missile equipped vessel when none is already at sea is upping the ante in a time of rising tension (as well as posing questions in peace time). Joining forces with the French or US for example to achieve the same result would also be construed as increasing readiness – and anyway who would command the firing chain in these scenarios?

Every time one of the submarines set sail it would become a 'strategic event' to be discussed at the highest levels balanced against which country we were having a spat with at the time – international declarations of assurances might have to de made, assurances that destroy the very reason for having it in the first place. And the continual use of 'no comment' and 'we can neither confirm nor deny' would not end the speculation in the press and elsewhere. In fact there would probably have to be a canned press release used every time one put to sea. 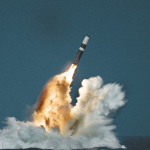 Then there is the essence to having a credible nuclear deterrent – other states who may harbour ill-will against us would not get past the planning stages before realising the futility of such action. But without it then just maybe …….. ? This could well lead us into requiring much more robust conventional forces. So any savings made when scaling down or scrapping Trident would be soaked up elsewhere in the defence budget anyway, maybe more.

At the moment we have deterrent that can change posture extremely quickly and is ready at all times to react if required. Trident submarines can get underway on exercises or patrols as required without questions to support the overall mission. Under the LibDem plan we would not have a deterrent at all, we would have an expensive but very small fig leaf.

We still live in a very unstable world and anyone who says that we will definitely never need to defend ourselves in future is either a liar or delusional. And if we have a need to defend ourselves and our way of life with the long term in mind then surely we need all the tools in the box to do the job properly. After all, who really wants to swap buckets of sunshine in anger? But if the other side has it and we don't, then who knows? I would not like to rely on their political stability for the safety of this country and its people; just because that's what other nations get away with does not make it a viable long term strategy for the UK. No-one knows what the world's geopolitical landscape will look like in twenty years time, whatever they may claim.