The Mayor of London came to Greenwich Square this week to launch his new initiative for low-cost homes for Londoners. Ahead of the press conference on Monday, Boris Johnson visited the site to assist in the pouring of a concrete slab that formed part of the L&Q Housing Association structure, which was captured by TV cameras and photo journalists. As well as helping to pour concrete from a skip, Boris was also invited to vibrate the concrete.

At the press conference, held within the on-site marketing suite, Boris mentioned that he was proud to have been part of the construction process at Greenwich Square and thanked Mace for providing him with the opportunity. He then outlined the 'Homes for London' Initiative, which aims to build 42,000 new homes a year by providing additional financial support, releasing more brownfield sites and increasing the percentage of shared ownership. He also intends to reduce the rigorous process for lending to developers, adopting the 'use it or lose it' approach for land owners and suggested that councils should be able to borrow against their assets. After the briefing, Boris ran his weekly #AskBoris Q&A with the public via Twitter from the marketing suite. 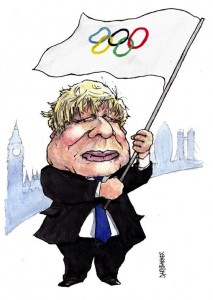 Gus Wright, Operations Director for Mace said: "I'm delighted that the Mayor of London chose a Mace site to launch his new housing initiative and that the whole event has been a great success. Greenwich Square provided a perfect opportunity for the Mayor of London to showcase the successful development of a brownfield site into a new community that includes a large percentage of affordable housing."

Located on a three-hectare site, Greenwich Square is a phased brownfield regeneration scheme on the site of the former Greenwich District Hospital. It will deliver 645 new homes – 50% of which will be social housing – as well as a new civic centre featuring a leisure centre, retail spaces, library and healthcare facilities, all set around a new public square. Mace has been appointed by the Greater London Authority through our Hadley Mace joint venture company as the preferred developer for the £215m scheme.

Tobin tax, do the figures add up?