The American Air Museum website is a digital record of the memories and stories of the men and women of the US Army Air Forces (USAAF) who found themselves serving their country from 'somewhere in England', during the Second World War. It also records the memories of the British people who met and befriended them.

The museum is collecting photographs, memories and information about the American airmen and women and needs your help to grow this unique digital resource. Perhaps you recognise the people or the place in one of the photographs on the website. Maybe you, or a family member, have vivid memories of American service personnel in your town or village. You might be a keen researcher of Second World War history and have some facts and figures to contribute.

This is our opportunity to capture the experiences of the Second World War generation who lived on and around American airfields in the UK. These inspirational veterans’ stories will be built into a dynamic resource for generations to come.

The American Air Museum website has been made possible through the support of the Heritage Lottery Fund, which awarded a grant of £980,000 to IWM Duxford, in December 2013, towards the redevelopment of the museum and the creation of the website.

“Some of the photographs on our website show the Americans talking to local children during the Second World War. Perhaps someone using our website will recognise their grandma or – better still – perhaps she will recognise herself. We hope that people will add their own pictures and tell us their stories.”

“The American Air Museum at IWM Duxford has possibly the best collection of US military aircraft outside the USA. Now, this project will not only overhaul the displays and galleries, it will also bring many fascinating stories to life, hopefully through vivid photography and stories of local communities just waiting to be told. We encourage as many people to come forward and get involved as possible.”

The American Air Museum website has been built in partnership with magneticNorth, an independent, multi-award winning digital design company based in Manchester. Working with clients including the BBC, Google and Manchester City Council, they have a wealth of experience in managing archive data and have collaboratively worked with the BBC to create the digital archive for iconic BBC Radio 4 show Desert Island Discs.

“The magneticNorth team are hugely proud to have been charged with delivering this important archive project. The sheer volumes of data and sources involved in the creation of the site has meant it has been a complex but hugely rewarding undertaking.

The content is obviously emotional and full of poignancy in many parts and we now look forward to seeing how the site moves forward as the public start to add their photographs, memories and information.

As a company, we have a heritage of collaborating on large archive projects and one of our biggest thrills is seeing the public reactions to the data we've formed, fused and blended over many months."

The website is based around The Roger Freeman Collection, a compilation of approximately 15,000 prints and slides assembled by Roger Freeman (1928-2005), a hugely respected aviation historian and native of East Anglia. Many of these images have not, up to now, been publicly available. The American Air Museum website launches with 5,000 of these images; the remaining images will be added in stages as the website develops.

The Roger Freeman Collection shows the variety of experiences of serving members of the United States Army Air Forces in Britain during the Second World War. Images depict the different roles undertaken by members of USAAF and also off-duty leisure time, the aircraft, combat missions, events and local communities.

Using the Roger Freeman Collection of photographs as its core content and with the creation of a sophisticated searchable and editable database, the website links each photograph to the serving group or unit it represents. It also shows the geographical location in which the photograph was taken, the type of aircraft the group operated and may also give the personal story of a man or woman shown in the photograph.

The American Air Museum website also hosts 225,000 names from the National Museum of the Mighty Eighth Air Force in Savannah, Georgia, USA, alongside a plethora of fascinating material from museums and individuals in the United States and the United Kingdom.

You can read stories about cooks and cowboys, fighter aces and firemen – and every job in between. There are stories of bravery and ingenuity and also stories of sadness and tragedy.

You can become an armchair history detective and help us to fill in the gaps in the information that we currently have. For instance, we need to know more about the civilians that the American service personnel met in the UK. We also know very little about the United States Army Air Forces bases which provided support to the air bases – the bakeries, laundries and logistics of catering for up to half a million Americans. Maybe you know about one of these support bases or live near a former USAAF site. If so, we’d like you to add this information to our digital maps on the website.

Your information might provide the vital link in a remarkable story. The website content will inform the exhibition in the American Air Museum and will be present in the exhibition itself. You might see your story in the museum. 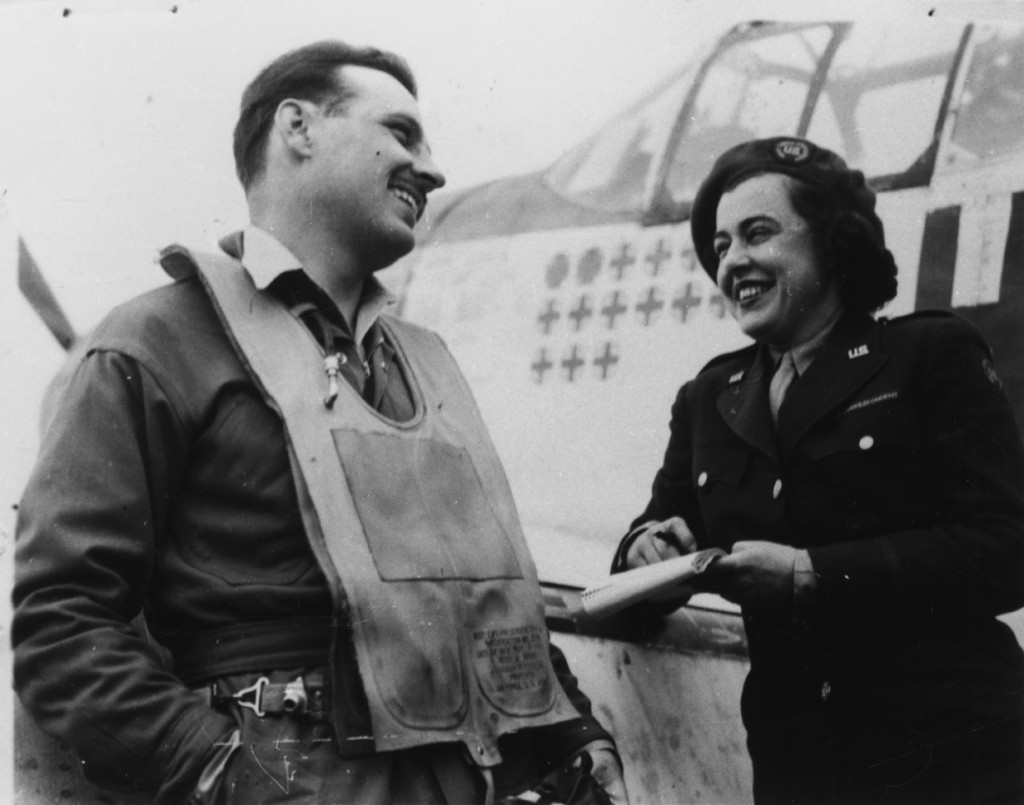 Irwin joined the St. Louis Post-Dispatch in 1932. Her request to be sent abroad to cover the war was denied, but in 1943 she volunteered to work for the Red Cross in the UK, still sending stories back to her paper while she did so. The photo dates from this time. Just before D-Day, Irwin’s paper changed its mind. Conveniently close to the action, she was accredited as an official war correspondent and followed the US Army through 1944 and 1945 as it pushed east towards Germany. The scoop of her career came when she and another journalist drove through Russian lines to Berlin, arriving on 27 April 1945. It was four days before Hitler's suicide and the city was in chaos.

The army took a dim view of the unauthorized expedition. Her accreditation was revoked and her stories were kept back until Germany's official surrender, then they became headline news. Irwin was awarded a year’s salary as a bonus, but on returning home was assigned back to the features department. She never succeeded in breaking into the all-male newsroom.