The Next Phase – David Bowie opens a new chapter

Breaking a decade of silence with the unveiling of The Next Day and ushering in a new phase in the ever ch-ch-ch-changing musical journey of the veteran pop icon, David Bowie, has delivered a highbrow and stylish rock record that primarily draws on the grooves and characteristics of his highly acclaimed Berlin period whilst still finding time to pay lip service to his glam rock glory days.

Reunited with producer Tony Visconti whilst employing the services of veterans such as guitar man Earl Slick and bass player Tony Levin, the Thin White Duke manages to deliver a viscously sophisticated song set covering subject matter ranging from classroom violence to the cult of celebrity and even warfare.

Blasting in with a sound reminiscent of Scary Monsters And Super Creeps (1980) and possibly incorporating the more erratic moments of Heroes (1978), the opening title track is a tour de force and finds Bowie taking lyrical inspiration from medieval history and placing himself in the mindset of a political dictator whilst Dirty Boys with its mix of mid tempo pop and sleazy sax seems a distant relation to DJ (1979).

The recent single The Stars (Are Out Tonight) continues the groove and themes found previously in New Killer Star (2003) and further back in Cracked Actor (1973) with some lazy but edgy guitars accompanying sharp instrumentation and a memorable chorus overlaid by a fabulously on song Bowie examining the obsessive cult of celebrity and its place in the modern world.

Whimsical and reflective, the simplistic piano melody and reflective tone of Where Are We Now recalls the contemplative moments found on Heathen (2002), gradually rewarding the listener by building towards its underplayed crescendo.

Valentine's Day is resplendently glam rock in its orientation, instantly reminiscent of Ziggy Stardust in its mannerism with guitarist Earl Slick no doubt paying homage to the great Mick Ronson via a wonderfully spiralling solo. The upbeat nature of the song is deliberately deceptive with a closer inspection finding Bowie chillingly examining the American fascination with its inherent gun culture.

How Does The Grass Grow with its darkly quirky and pacifist stance is instantly reminiscent of the disjointed pop of Boys Keep Swinging (1979). Distorted guitars and wonky keyboards are underpinned by a chorus that bizarrely finds the singer mimicking the guitar motif from Apache whilst the answer to the question of how does the grass grow is found in the stark chant of blood, blood, blood.

You Will Set The World On Fire feels dangerously close to replicating the sound of Tin Machine (1989) and finds its rampant guitar riff playing alongside bombastic drums and a venomously retrospective lyric that all play their part in a monstrously catchy rocker that again examines those aforementioned stars and the fame game.

Album closer Heat may be seen by some as a homage to the darkly operatic theatricality of that other great musical pioneer Scott Walker, heavy synths and brooding vocals abound and find the ever changing Starman ultimately examining his own self nature with an icy and highly atmospheric listen that hints at the many changes undertaken by this most chameleon of artists. 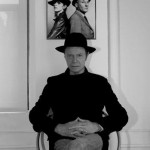 An ambiguously cryptic and wonderful ending to an album where all fourteen songs demand attention whilst the collection as a whole may even come to be seen as the strongest body of work delivered by the musician since the high water mark of Low (1977) and Heroes (1978).

Time and repetitive listenings may well be judge of that but for now it is safe to say that the Thin White Duke has certainly returned with an intriguingly complex and highly enriching record that fully deserves the acclaim already awarded by listeners and critics alike.