The Only Sector I Believe Will Deliver as Corporate America Struggles

Before, what we saw instead was sluggish revenue growth along with companies having an easier time on the earnings front, as Wall Street does what it usually does—lowering earnings estimates to meet the changing situation, making it easier for companies to meet expectations. In the first-quarter earnings season, it was about the strain placed on companies by the bitter winter. That’s fair, but there really are no more excuses for this quarter.

The nation’s jobs numbers are looking better after the country managed to recover all of the 8.7 million or so jobs lost since the start of the Great Recession. If the economy can continue to generate jobs growth at more than 200,000 new jobs monthly, then we would expect consumer spending and confidence levels to improve. Yet having said this, there’s clearly still some trepidation out there, especially with the decline in wealth levels of the middle class and below.

The rich are getting richer, but even as a group, they cannot spend the economy to stronger growth without the help of the middle class. We need to see income levels expand across middle-class America in order for companies to have any hope of expanding their revenues better than what we are seeing now. This makes sense to me: spread the wealth and the economic renewal will pick up.

But until this happens, I suspect the corporate earnings and revenues to be stale. Companies will continue to simply cut costs to reflect lower revenue growth. This is not good for the country, but it’s great for Wall Street and shareholders, which we all are.

For the second-quarter earnings season, the earnings growth was slashed to 5.4% from a much higher 6.9% as of March 31, according to a report from FactSet. (Source: “Earnings Insight,” FactSet web site, June 6, 2014.) The report indicates that eight of the 10 sectors have cut their earnings season expectations. This is not supportive of the record moves by the DOW and S&P 500. 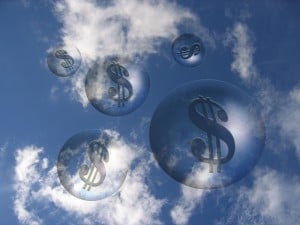 And similar to the events of recent quarters, we are continuing to see many more companies issuing negative earnings-per-share (EPS) guidance. About 82 S&P 500 companies have so far issued negative EPS guidance, compared to only 27 companies with positive guidance for the second-quarter earnings season. Does this reflect corporate strength across the nation? It doesn’t, and it is worrisome, given the recent action in the stock market.

There’s also the revenue end. The simple fact is that America is not growing its revenues. The weak gross domestic product (GDP) growth supports this anemic revenue growth in the earnings season.

The research from FactSet suggests that revenues for S&P 500 companies will grow at a mere 3.1% in the second-quarter earnings season, down from the previous 3.7% estimate on March 31. These are not great numbers, and I doubt we will even see revenue growth in excess of three percent.

The top area of growth in terms of revenue and earnings is health care, as predicted by FactSet. To play this growth, you can look at the medical device stocks or drug companies. Alternatively, you can buy the SPDR S&P Healthcare Equipment ETF (NYSEArca/XHE) exchange-traded fund (ETF). On the small-cap stocks side, a healthcare ETF to look at may be PowerShares S&P SmallCap Health Care (NASDAQ/PSCH).

This article The Only Sector I Believe Will Deliver as Corporate America Struggles was originally published at Daily Gains Letter.