The Perfect recipe for Christmas Cheer

Take one multi-faceted actor, author, director, comedian, musician, political satirist and radio personality, add an equal amount of angel-voiced Welsh singer songwriter, combine with one of the most respected actresses in the UK, throw in two or three highly acclaimed comic voices, add a generous mix of music legends, blend together, put over a vigorous heat and serve sizzling.

The perfect recipe to kick-off the Christmas season returns to London this winter. Harry Shearer and Judith Owen are back with their hugely popular Holiday Sing-Along. Fresh from his tour of the hit play Daytona in which he starred with alongside Maureen Lipman, The Simpsons and Spinal Tap star has once again teamed up with his wife the acclaimed singer, fresh from cutting her new album, to host an evening of guests, seasonal cheer and irreverent fun.

On November 30 Judith Owen and Harry Shearer’s Holiday Sing-Along will transform Leicester Square into a good old-fashioned Christmas knees-up with a list of guests that is enough to get any lord a-leaping or lady dancing. They include the theatrical legend Maureen Lipman, the award winning comedy phenomenon and small man in a box Rob Brydon, the king of acoustic bass Danny Thompson, eclectic singer, songwriter and keyboardist Charlie Wood, the vocal talents of Jaccqui Dankworth, and of course Barry from Watford aka the superlative Alex Lowe. Together with more guests to be announced, they promise to gently roast some seasonal chestnuts, pull a few crackers and unwrap a rare gift or two.

Judith Owen and Harry Shearer’s Holiday Sing-Along began life as a private affair—an annual gathering with family and friends in the couple’s Los Angeles home. Soon there was no room left at the inn and Owen and Shearer moved their Sing-A-Long to the Walt Disney Concert Hall where they were joined by a host of stellar talent. Since then, the show has gone on to become a perennial touring phenomenon, making highly successful premieres in other major U.S. cities including New York City, San Francisco, and others. 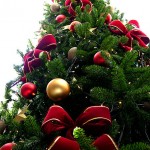 When my girlfriend told me we were going to a Xmas sing-a-long I told her I'd rather stab my own eyes out! Now I'm going every year… it's that much fun! Seattle resident

The Owen/Shearer Holiday Sing-A-Long is an evening of music and mirth for Christmas lovers and Scrooges of all ages. Acting as the perfect hosts Owen and Shearer both sing and play (piano and bass, respectively) and welcome an array of superbly talented guests to join in the festive fun.

New Orleans residents, Owen and Shearer are passionate protectors of its musical heritage and proceeds from this show will benefit the New Orleans Musicians Assistance Foundation (www.nomaf.org).