Military technology has come a long way in the past century, but military innovation has arguably made the greatest leaps in the past decade.

While these high-tech inventions have unmatched value to the military, their value doesn't stop there.

A surprising amount of inventions that were originally created for military use can also be used by everyday adventurers, preppers and technology enthusiasts.

Here, we take a look at some of the greatest new inventions from the past decade.

Tapping into childhood fantasies everywhere, the XOS 2 is something of an Iron Man suit, allowing the user to lift 200 pound weights and punch through slabs of wood that might normally injure them. The makers of the XO2, which was developed in 2010, intend for the technology to be used first by the military.

First used in World War II, night vision optics technology helps soldiers see in situations they normally would not be able to, usually in a monochrome green color scheme. Though this technology was initially developed decades ago, its application and usage has flourished in the past ten years. Unlike a lot of the recent military technology, night vision optics are available to civilian users, but you should check with your state's specific laws regarding their possession. For instance, in California it is a misdemeanor to possess some types of night vision devices. 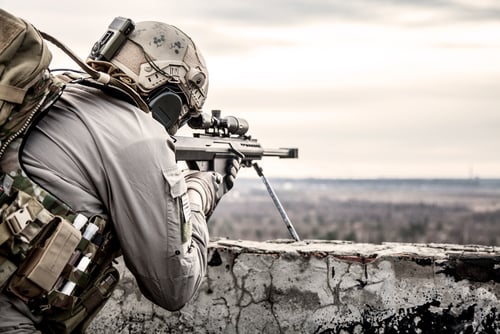 The technology that goes into helmets has changed dramatically throughout U.S. military history, from "doughboy" helmets in World War I to "steel pot" helmets in World War II to the one-piece ballistic-fiber helmets established in the 1980s. But the next kind of helmet may be even more impressive. A U.S. Defense Advanced Research Projects Agency grant is funding research into a helmet that would regulate soldier's brains using transcranial pulsed ultrasound. The possibilities for this technology might mean soldiers could function on less sleep or be able to deal better with pain, providing an incredible advantage on the battlefield.

Lockheed Martin's Samarai Micro Air Vehicle weights less than half of a pound and is smaller than a human finger. Its flight is actually based on the descent of a maple seed, and it only has two moving parts. Lockheed Martin is hoping to make the device even smaller given its simple construction, and intends to make it usable with a touch-screen.

When the Swedish Ministry of Defense needed technology to create fire in even the most extreme conditions, they created the Swedish firesteel, which easily creates sparks to ignite a campfire in any climate. Various models of the technology are available for civilian use.

Functioning similar to a water gun, troops in Afghanistan are using this new tool to help disable roadside bombs. The technology was developed at Sandia National Laboratories in New Mexico.

While explosives could hardly be called safe, there are less dangerous alternatives to traditional explosives in development. The IMX-101 was developed in 2010 and its explosive functions similarly to TNT, but is more thermally stable. The result is a less volatile explosive and safer conditions for soldiers.