The power of the Alternative Vote

In independent study claims that a switch in the UK to the Alternative Vote (AV) system would place more power in the hands of the voter.

The study, conducted by the new economics foundation (nef) (http://www.neweconomics.org/press-releases/alternative-vote-would-create-44-new-marginal-seats-says-new-report) says that AV would create 44 new marginal seats, which would make more MPs work harder for your vote.

In 5th May 2011 the UK voters will be offered to make a decision in whether to keep the traditional 'first past the post' (FPTP) one person one vote system or whether to adopt the AV system in tandem with the local elections.

Under AV voters would be asked to place the candidates on the voting slip in numerical order, with 1 being the top, 2 being their second choice etc. Then, if one candidate gets more than 50% of the votes they are automatic winners but, if no clear winner emerges, then the lowest scoring candidate is eliminated from the contest and their votes redistributed in accordance with the second choices of those that voted for or them. If no clear winner with more than 50% emerges from that exercise then it is repeated until one does.

But the report does go on to say that AV is still not the most ideal solution on offer:

"The report is based on a comprehensive statistical analysis of general elections in the UK over the last 30 years and concludes that although AV does offer some improvements over FPtP it will not alter the main problem with the UK’s voting system: single member constituencies. A fairer voting system is possible, but only if the UK moves towards larger constituencies, where voters elect multiple MPs for their area. Such systems are already used in the UK to elect the London Assembly, Scottish Parliament, Welsh Assembly and the UK’s members of the European Parliament." 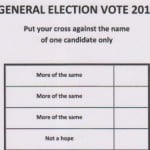 As the report goes on, this will increase marginal seats, but will not eliminate safe seats, which guarantee a certain party riles the roost for decades if not centuries in certain constituencies.

What the nef say is fairer is a type of Proportional Representation (PR), which the UK is not being offered at this upcoming referendum.

The danger is that if we say no to AV the claim will be that the public has spoken and we will be stick with FPTP for many decades to come, with no chance of change. Conversely, if we choose AV we may then never be offered that one extra step towards full proportional representation.

Of course the main problem is that the three main parties need their safe seats. They are not likely to offer the electorate something that degrades their own power base are they?