On Thursday  5 June 2014, Her Majesty The Queen, accompanied by His Royal Highness The Duke of Edinburgh, unveiled a plaque at St Pancras International station to celebrate the 20th anniversary of the opening of the Channel Tunnel and the launch of international high speed rail services between the UK and mainland Europe.

The unveiling of the plaque preceded the State Visit of The Queen and The Duke of Edinburgh to France from 5 to 7 June at the invitation of the President of France, François Hollande.  As part of the State Visit, Her Majesty and His Royal Highness will attend events in Paris and in Normandy to commemorate the 70th anniversary of the Normandy landings and will be received at the Élysée Palace by President Hollande. 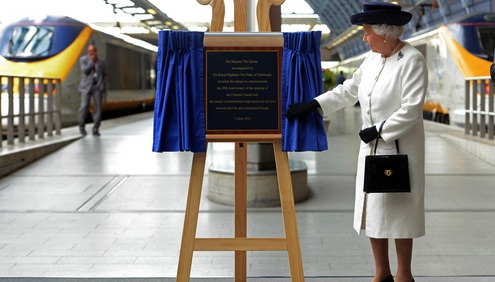 Since the opening of the Channel Tunnel, more than 65 million vehicles and 330 million passengers have travelled on services through the Tunnel.   This ground-breaking project heralded the start of a new era of collaboration and innovation and has transformed links between the UK and the Continent.

“The opening of the Channel Tunnel twenty years ago heralded a new era in international travel and trade between the UK and continental Europe.  Today 65 million vehicles and 330 million people have already travelled through the Tunnel, bringing substantial economic benefits to the UK and Europe.  But for us, the first twenty years have been just the opening chapter. There is a great deal more potential for high speed passenger and rail freight services to develop in the future”.

“The launch of Eurostar services between the UK and mainland Europe represented a historic milestone revolutionising rail travel on both sides of the Channel.  Over the last twenty years we have carried over 145 million passengers as high speed rail increasingly becomes the preferred option for short haul journeys.

“With the advent of a new state-of-the art fleet of trains and a range of new routes, we are looking forward to extending our reach and cementing further the relationship between the UK and continental Europe.”

“We were delighted to welcome The Queen and The Duke of Edinburgh to St Pancras International today.  Since Eurostar began running international high speed rail services between the UK and continental Europe, we have seen a complete step change in rail travel – and, indeed, international travel – in the UK.  We work closely with both Eurostar and Eurotunnel and it’s this partnership approach which has ultimately benefited our customers.”

Following the unveiling ceremony, the commemorative plaque will be displayed in the international services check-in area of St Pancras International station.