The questionable morality of complying with the law

Everyone wants to think that by paying taxes and repaying debt that they are doing the right thing by participating in society's supporting rules.

But the fact is the rules are not there to support society, they are there to support the interests of theÂ financial and politicalÂ elite who use and manipulate the law to maximise profits which they have an interest in and they themselves do not comply with the law.

Up until recently all this might have sounded like conspiracy nonsense but as the infrastructure of the globalist economy has broken down the very nature of the beast has been revealed in the recent scandals such as the manipulation of Libor, the price of gold and the price of petrol to benefit the banks and financial traders.

Globalism has not failed as a means to provide fair trade. I say this because, for a system to fail in such a way it must first have been set up to provide fair cross border trade; and globalism was never set up toÂ facilitate that even though it was sold to the masses as such.

The same applies to the way our society works in general, I ask how can a system that is run on a fractional reserve banking system ever succeed in being fair?

For too long the public have become used to following the rules andÂ abidingÂ by the law because they have felt that it is morally correct to do so, but if the mass media decided that they would tell the truth about money/debt and who controls what and where on the front page of every newspaper we would have riots the likes of which this country has never seen before.

The problem is the public in general do not know that every time they sign a loan contract they are actually themselves creating money that hither to did not exist and it is the bank that enables this process. The bank does not take Â£10,000 of depositors money to give the borrower a Â£10,000 loan.

After this money is created by the individual and lender, via a one sided contract, the bank then takes the money and charges interest on it and makes a profit from money which they have not really lent to you.

And that is the crux of the matter, the banks have not lent you anything so where is the moral obligation to repay the money outside of your supposed contract which has in effect been mis-sold and misrepresented to you in the first place?

The only obligation is a legal one and it has become quite clear that the law and morality/justice parted company the day justice was bought by the banks.

There is great moral hazard in any such participation yet we are seemingly powerless to do anything about it until the masses are educated on these matters giving birth to global wide non compliance i.e. removal of cash from these corrupt institutions.

Why are we trying to fix the banking system when we should be doing the exact opposite?

OurÂ politiciansÂ are running around like headless chickens to bring back the so called good times which were built on such feeble grounds as property speculation and yet they are an unsuitable demographic of representatives with vested interests inÂ theÂ banking system and the current construct of society at large.

One would expect pitchforks at the gates of London Â each time a multiÂ millionaireÂ politicianÂ (which the cabinet mostlyÂ consistsÂ of) who gained his or her wealth through inheritance or their political influence, turns around to the public and demands that financial cuts be made, which affects the poorest, the disadvantaged and the disabled whilst they themselves remain insulated to the ebbs and flows of the global economic crisis.

But that is not the case because the public are distracted by their Bread and Olympics so the reality of the situation is that they are active participants in their own poverty, whilst being duped into thinking they are doing the right thing.

Voting will not change the situation either because the main three political parties all have vested interests in the status quo, so any changes made to the banking system would have direct/indirect implications for party funding and let us not forget the constant need to court the press which means policies are (as has been proven recently with a certain media mogul) also driven/dictated by the interests of the owners of large media outlets.

Any wonder Jesus chased the money lenders out of The Temple? 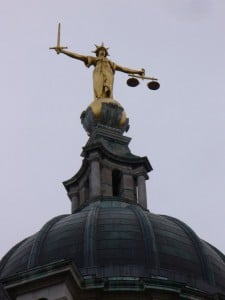 The Scales of Justice by Colin Smith