Marvel yet again plunder their back catalogue of characters as both Captain America and Thor make the jump from the illustrated page to big screen in 2011.

Both movies may firmly test the comic book company with productions based on a Norse god and a shield throwing guy dressed in an American flag. The trailer for The First Avenger: Captain America finally arrived this week, but who is he?

Captain America first appeared in 1941 in Timely Comics and was the creation of Joe Simon and comic legend Jack Kirby. The story of an underdog, shunned for national service and then genetically enhanced, Steve Rogers became the agent and super solider fighting the Nazi menace.

Although the character waned in popularity in the post war years, it was Stan Lee who, in the early sixties, brought the character back into the limelight by incorporating him into the emerging world of Marvel Comics alongside characters such as Iron Man and The Incredible Hulk.

Chris Evans certainly looks the part as the beefed up ‘All American’ hero and most importantly the suit does not look daft but incorporates a Second World War feel with a shield that flies nicely thanks to some CGI. Tommy Lee Jones provides the gruff as the military head behind the creation of a super solider whilst Hayley Atwell looks suitably both apple pie and kick ass sexy as the potential love interest and heroine.

Director Joe Johnston has previously worked on The Rocketeer (1991) and the first impression is that he has managed to yet again maintain a retro matinee backdrop with a slight pulp feel. 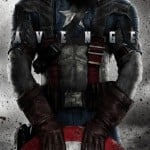 But given the nationalistic nature of the character it will be interesting to see how the movie fares outside of the States especially during a period when American foreign policy is not always welcome in some quarters.

But after all this is just a comic book and hopefully Johnston will keep the whole thing tongue in cheek.

With a stampede of Superhero flicks currently hitting the screen what may set the Cap’ apart may be it’s villain: The Red Skull may be one of the most difficult characters to bring to life but those FX boys seem to have pulled it off and in Hugo Weaving the production has a great character actor who may deliver something special.

Either way we will find out later this year…..