Scientists are now developing a new anti-hunger additive for all those cold goodies like yoghurts, shakes and smoothies.

This additive is an updated form of methyl cellulose that dissolves in cold water but, once ingested and heated up by the body, forms a gel in the stomach that gives a feeling of fullness before safely passing through to the small intestine as time passes.

The new form of methyl cellulose, SATISFIG-LTG, has been trialled on volunteers who went on to eat 13% fewer calories at a subsequent meal about two hours afterwards.

The scientists who presented the report at the 244th National Meeting and Exposition of the American Chemical Society, Carsten Huerttermann PhD, is quoted in medicaldaily.com as saying "This ingredient would make people feel full after eating smaller amounts of food. With that sense of fullness and hunger-satisfaction, they would not crave more food. In our first study, we saw that fewer calories were consumed at the following meal after eating our new product. Our next step now is to investigate in further studies the mechanism of action and whether this may have an impact on weight management."

The basic ingredient of SATISFIG-LTC, methyl cellulose, is already used in food as a binding agent but only when treated and made into the new compound can it then form the gel when warmed to body temperature. It has also been used both to treat constipation and slow down diarrhea says medicaldaily.com.

The next move is to see it work with cold foods, obviously as hot foods would presumably just turn into a gelatinous and unpalatable mess on your plate.

Bring on the ice cream and cake! Although I’m not sure that I want a couple of pounds of gel wobbling around inside me. 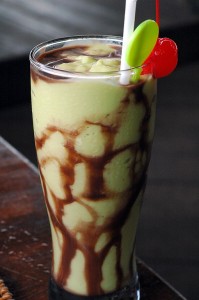 Avocado shake with chocolate by Jpatokal

Friends of the earth and unions question fracking jobs claims