It seems probable that those households which pay more in taxes than they receive in services (the givers) are likely to be against ever-increasing government spending, a bloated overpaid, over-pensioned public sector and massively expensive institutions like the EU. Whereas those households which receive more from the government than they pay in taxes (the takers) will support large government and increased public-spending – after all, the more the government spends, the more they get and the better off they are.

At some point under New Labour (probably around 2005) Britain reached a very important “tipping point”. The dictionary definition of a “tipping point” is the point at which a slow, reversible change becomes irreversible, often with dramatic consequences.

This tipping point was when Britain moved from a situation where the majority of households were “givers” paying more in tax (including direct taxes such as income tax and indirect taxes such as VAT, fuel and alcohol duties) than they got in services (including state spending on benefits in kind, such as the NHS and state education) to one where the majority of households became “takers” getting more in services than they pay in taxes. In 1978/9 around 43.1% of households were “takers”. By 2010/11 the “takers” had reached 53.4% of all households. 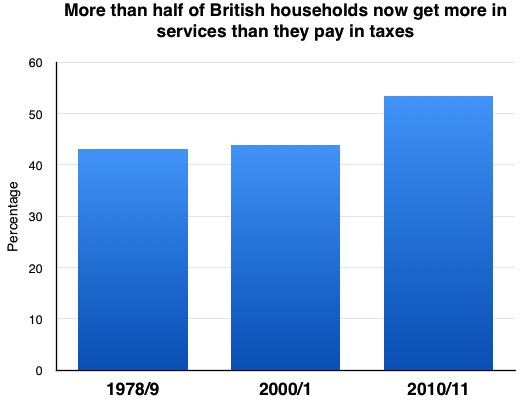 Now the percentage of “takers” is likely to be even higher.

This little-known figure – “takers” becoming a majority of households – has massive implications for Britain’s future.  “Takers” are likely to vote for ever-increasing borrowing and spending – after all, it’s not them who will have to pay the bills.

Many commentators have wondered how, after ruining the British economy, Labour can be leading in the opinion polls and headed for power in May 2015. Perhaps ”takers” becoming a majority is the explanation. As the Americans would say, “there are more people in the wagon than are pulling it”. Then when you factor in that Brown hugely expanded the public-sector bureaucracy, you have millions more who will see more spending and more borrowing as being to their personal advantage.

Once there are more “takers” than “givers” in a country, the majority will always vote for more money for themselves until they bring the country to its financial knees.

‘A democracy cannot exist as a permanent form of government. It can only exist until voters discover that they can vote themselves largesse from the Public Treasury. From that moment on, the majority always votes for the candidates promising the most benefits from the Public Treasury with the result that a democracy always collapses over loose fiscal policy, always followed by dictatorship’.

I suppose that the only hope for Britain is if enough of the “takers” are too lazy, indolent or stupid to go out and vote in 2015.

David Craig is the author of "GREED UNLIMITED How Cameron and Clegg protect the elites while squeezing the rest of us". His latest book "DON’T BUY IT! The tricks and traps salespeople use and how to beat them" will be published on 17 February.

David Craig will also be speaking at the Royal Overseas League in London about "The Great Savings and Pensions Scandal" at an event hosted by the Economic Research Council on Monday 24th February.