At a speech today in New York, Bank of England Governor Mark Carney addressed challenges to forecasts of a sustained recovery in the UK and US economies.

Speaking to the Economic Club of New York, he argued that a recovery was gaining pace in the UK, underpinned by a reduction in extreme uncertainty, significant progress in repairing the core of the financial system and a marked improvement in household balance sheets. But he said that the repeated over-optimism of forecasts of advanced economy growth in the past five years meant it was unsurprising that pessimistic ideas of ‘secular stagnation’ or persistently weak growth had been revived.

The Governor argued that, although the UK had been in a situation in which conventional monetary policy had not been able to stimulate demand sufficiently to keep economic activity at its potential level, this had not generated a deflationary spiral and there was early evidence that this ‘liquidity trap’ would be escaped over time.

He also challenged those who maintained that weak potential supply growth would constrain the pace of recovery. He argued that, although the possibility could not be ruled out and surprisingly low unemployment rates in the UK and US did point to a deterioration of supply side performance, there were a number of reasons to think that this would not be persistent. “There are other reasons to think that growth itself should bring a supply side improvement,” Governor Carney said. “As the economy recovers, investment should pick up and part-time workers should shift into more productive full-time work.”

However, the Governor stressed that, with the UK and US economies remaining far from a normal position, and with the scope for a revival in potential supply itself depending on the speed of recovery, central banks needed to address the risks of secular stagnation by deploying a range of policies in a coordinated fashion. 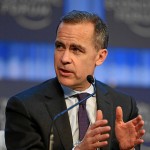 He said the Bank of England was alive and vigilant to the risk that this carried, of generating imbalanced growth or excessive debt. The Bank had demonstrated its flexibility to address such risks with its package of measures targeted at the housing market. Such measures would allow monetary policy to remain stimulative as long as needed. The Bank had also acted to repair the UK financial sector and implement better financial regulation and supervision, which would help to restore the supply of credit to the real economy and guard against the build-up of financial risks.

More generally, the Governor argued that these actions highlighted the fundamental importance of co-ordinating policy actions and exploited the considerable synergies of combining policy responsibilities in the Bank of England.

He concluded that, although central banks could be a catalyst for recovery, long-term prosperity across economies would depend on measures taken to increase the growth of supply capacity, particularly those that reinforced an open, global trading system.