The Stocks to Watch This Earnings Season

The country’s gross domestic product (GDP) growth and jobs creation has been edging higher and providing some optimism for the stock market as we head into the third-quarter earnings season that begins officially with Alcoa Inc. (NYSE/AA) today.

A strong earnings season could likely be enough to drive stocks upward towards new highs. But as long as the outlooks from companies look good, the stock market will be heading northward.

The results from Alcoa will be closely watched, as the company is considered a barometer of the global economy due to the use of aluminum in many applications and across many sectors.

I want to see some leadership from the financials and technology sectors in the earnings season to help drive the broader market.

Over the past several earnings season quarters, the revenue side has been muted and earnings have been driven by cost-cutting rather than strong revenue growth. Based on the current estimates for the third-quarter earnings season, it looks like much of the same this time around as revenue growth is predicted at 3.7% for the S&P 500 companies versus 3.5% as of June 30, according to research from FactSet. (Source: “Earnings Insight,” FactSet web site, September 26, 2014.) The growth in this earnings season, while not earth-shattering, does show some promise, as it’s slowly rising, which is what we want to see.

Earnings are estimated to advance 4.7% in the third-quarter earnings season, which is well below the 8.9% estimate provided as of June 30. Again, this isn’t great, but it would be higher on a sequential basis. 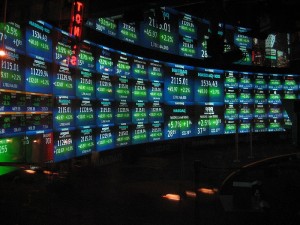 The reduction in earnings isn’t impacting any of the 10 S&P 500 sectors. The healthcare sector is expected to buck the negative revisions in this earnings season, after raising its estimated earnings growth to a healthy 10.6%, compared to 10.4% as of June 30. You can buy healthcare stocks in medical devices, drugs, or solutions, but investors can also play this sector via an exchange-traded fund (ETF) like the SPDR S&P Healthcare Equipment ETF (NYSEArca/XHE), or the PowerShares S&P SmallCap Health Care ETF (NASDAQ/PSCH) for more aggressive investors.

The bad news from FactSet is that there could be some stalling from the financial and energy sectors. The banks have traditionally been a driver of the stock market, so this is negative news. On the energy end, with oil prices breaking below $90.00 per barrel for West Texas Intermediate, oil stocks could fall. I see this as an investment opportunity to pick up shares of energy companies. Moreover, lower oil prices translate into lower cost for gasoline, which could help consumer spending and overall economic growth.

The lower oil prices could also benefit energy-intensive sectors that use oil as a major cost, such as the airlines sector, which is a favorite going forward. I like the air carriers including JetBlue Airways Corporation (NASDAQ/JBLU) and United Continental Holdings, Inc. (NYSE/UAL).

This article The Stocks to Watch This Earnings Season was originally published at Daily Gains Letter.