The Stone Rose are set to play new shows in London's Finsbury Park and Glasgow Green next year.

June 7th and 8th are the dates set for the Finsbury Park gigs followed by June the 15th for Glasgow Green withÂ rumorsÂ circulating the music press of new material being performed at next year's shows and speculation of a new album in 2013 from Ian Brown and co.

The Glasgow shows will include support from old friends, Primal Scream who Mani (Stone Roses bass player) playedÂ with after the RosesÂ split but then went onto leave in order to focus on the reunited Stone Roses.

There are also a couple of gigs lined up in Australia at the Future Music Festival gigs spread across the country.

Next year will be a big year for fans of The Stone Roses as a documentary by This is England Director, Shane Meadows.

The as yet untitled film is hoped to be a cinema release documenting 2012's reunion gigs including Heaton Park. Perhaps the Stone Roses want to keep a full visual and audio record of their reunion gigs seeing as footage of their seminal gigs at the height of their career is ratherÂ sketchy.

Tickets for the aforementioned shows are priced at Â£55 excluding booking fee. 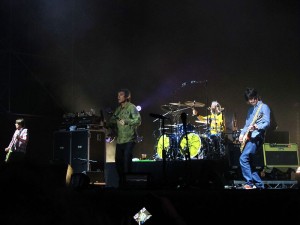