The evening of June 17 2015 will see the official publication of the 2015 edition of Diversity UK’s Top 100 Asian Stars in UK Tech list, published in association with NewAsianPost.com, at a networking reception hosted in Central London by KPMG, who will be sponsoring the event.

The list will showcase the wealth of talent that is currently involved in the British tech scene including startup founders, social entrepreneurs, technologists, venture capital and angel investors as well as key policy makers and game changers.

The key objective of the list is to address the perceived lack of diversity in the tech sector, by highlighting the ground-breaking business models, apps, funding and support networks being created by these Asian digital entrepreneurs.

“KPMG is proud to support this innovative list. The UK tech industry is a growing sector and one with a healthy level of diversity. The Top 100 Asian Stars of UK Tech list represents an important celebration of the Asian talent in UK tech and is a refreshingly different way of looking at the statistics.”

The tech industry in the UK is growing rapidly and the sector accounted for 1.46 million jobs last year, with demand for skilled individuals growing at a rate of 28% year on year according to statistics in the recent Tech Nation 2015 report. However, it is also an industry that is frequently cited for struggling with diversity. The contribution of Asians of both genders, to the UK’s tech industry is seen as something of a bright spot by many in the industry, and Asians are particularly well represented in the UK’s tech sector despite being only 5% of the population, something the list intends to highlight. 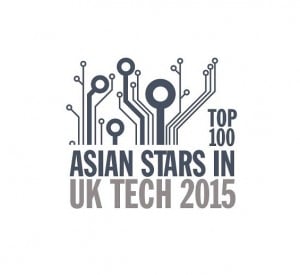 The list will also be supported by Wayra, a startup accelerator owned by Telefonica, one of the world’s largest telecommunications companies. Since launching in the UK, Wayra has invested in 100 and raised $50 million in third party investments. Wayra is a fitting partner for the list, which will recognize some of the Asian community’s most prominent investors in tech. Wayra’s own research has shown that the start-up system, in particular, is five times more likely to have individuals from ethnically diverse communities in C-Suite positions than FTSE 100 businesses. Furthermore, Wayra’s research showed that 18.7% of people working in startups are from an ethnic minority background, the majority of them Asian. This affirms reports that Asians are more entrepreneurial than the average population and is a mirror image of what is now happening in Silicon Valley, as Asians steadily establish their global digital empires.

The Top 100 Asian Stars in UK Tech list, NewAsianPost.com and Diversity UK are the brainchild of the digital entrepreneur Lopa Patel who has long been recognised as an evangelist for STEM and the tech industries in the UK. She devotes a significant amount of her time towards promoting enterprise and careers in the tech industry, as well as advocating for more diversity in these fields. Lopa’s work as a passionate proponent for the STEM industry was recently recognised in April 2015, when she became the first Asian woman to receive the Queen’s Award for Enterprise Promotion.

The evening will see a committee of judges selecting the top five competitors in categories including investors, startups, social entrepreneurs, women and digital influencers.