Informi research reveals wealthiest Britons who did not go on to higher education. There are 13 UK billionaires who dropped out of education after leaving school.

A new rich list ranking the wealthiest UK individuals and partnerships who did not go on to higher education at university has been revealed by Informi, the website offering free practical advice and support for small businesses.

There are a total of 13 billionaires according to the list, collectively holding a fortune of £45.5 billion.

The list is comfortably headed by real estate and metals moguls David and Simon Reuben, who hold a net worth of £12 billion, and are the second highest ranking Britons on the entire Forbes rich list behind the Hinduja family. 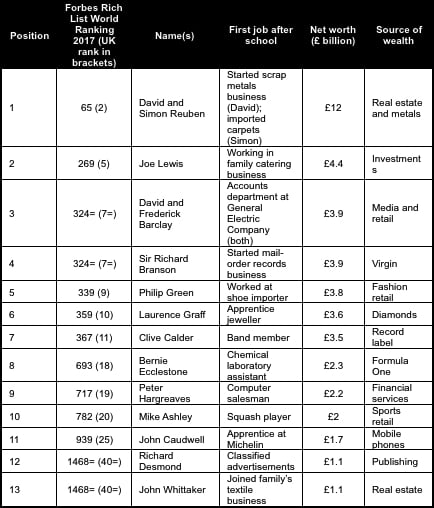 Also included are well-known celebrities such as Sir Richard Branson (£3.9 billion), the founder of the Virgin Group, and Bernie Ecclestone, former chief executive of the Formula One Group.

Commissioned by Informi ahead of this year’s release of A-Level results in England and Wales on Thursday, the combined net worth of the top five names alone is around £28 billion.

“For those students nervously awaiting their A-Level results this week, and those who will be receiving their GCSE results the week after, this list demonstrates that some of the UK’s most successful and inspiring business individuals have gained financial success without having gone down the university route first.

“There’s no doubt that higher education can help many people into their career of choice. But equally, if you have a great business idea, you may be able to achieve your dreams and aspirations with the help and support of those around you, and by finding the best sources of expert advice to help you on your way.”