The UK has a new basket of goods

The Office for National Statistics has updated the basket of goods, which they use to measure inflation and at the same time brought it into the 21st Century.

The ONS has a basket of 650 goods and services covering a wide range of normal consumer purchases. It collects round 180,000 prices of these items from around the country and as they change from month to month they are used to put together both the Consumer Prices Index (CPI) and the Retail Prices Index (RPI).

RPI is an inflation measure developed during and after WWI to protect workers from price increases and it became the main measure for many years. CPI was launched in 1996 and is an internationally comparable measure that uses international rules and guidelines. CPI has, since 2003, been the yardstick the Treasury and the Bank of England use with a target of 2% when setting interest rates (for interest it is currently twice that at 4%).

But as society develops and new technologies emerge and fashions, needs and tastes change the basket of goods has to change with them, or it becomes unrepresentative and worthless.

This year sees the addition of smartphones and their 'apps' as well as dating agency fees. They have also now separated out 32 inch or larger televisions and made a new class of home cinema systems that are becoming so much more popular.

Out goes shoulder of pork (replaced by oven ready joint), vending machine cigarettes (because if the impact new smoking regulations has had on their sales), vet fees for spaying kittens and Hardboard has been replaced by MDF (Medium density fibreboard).

Generally, unless there is a good reason, items where consumers spend over Â£400 million a year on them are put in and where that drops below Â£100 million they are out. So, what's got the nod and what's been put in the waste basket? 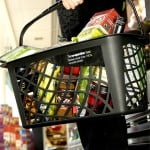 In the new basket of goods:

What's been moved from the basket of goods to the waste basket?

Although the ONS basket tries to emulate a 'typical' shop, it does not differentiate between items people need to live and those that people buy as a lifestyle choice. Splitting the two and publishing CPI and RPI for both would be easy to do and more valuable than the current single basket.