The US property market – bigger and newer in 2015

Central Florida has seen a surge in new developments coming to market in the past 18 months, with property agents there reporting strong interest in new-build properties from investors, said OverseasGuidesCompany.com in July.

“It’s a good sign when North America’s largest homebuilders are involved in developing new communities in Central Florida. Right now, these include DR Horton, Lennar, Pulte Group, Beazer Homes, Taylor Morrison and the Canadian firm Minto – the heavyweights are there and are busy,” said Richard Way of OverseasGuidesCompany.com, after a visit there in July.

“Around Orlando, in particular south of Disney World in areas such as Davenport, Kissimmee and Haines City, developers have returned to the market following a period that saw demand in the Sunshine State focused predominantly on foreclosures and distressed sales. Realtors tell me interest in pre-construction property, where a buyer chooses a lot and style of house that is then built within a new community, is very popular with investors, both lifestyle investors looking for short-term rentals and those buying for long-term lets. An increasing diversity of investors is helping to fuel the market too, with rises in Chinese, Brazilian and Venezuelan, as well as British, buyers notable in 2015. 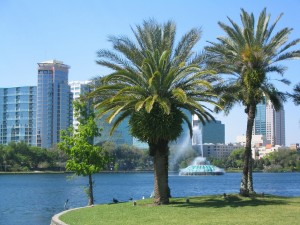 “Prices for new homes are very appealing right now and often, when compared to a comparable resale, buyers see value in opting for the new home – there are deals to be had on extras, such as granite worktops and furniture packages, which can run into the tens of thousands of dollars. And of course, a new home comes with new air con, often green and more efficient building materials, and typically a 10-year guarantee – which all bring peace of mind to an investor.

“Savvy investors buy through an experienced realtor who also operates a property management service, making their purchase a hands-free investment. One developer I met sold an 80-unit development in ChampionsGate in just five months, half of the units going to Chinese investors. They launched another much larger 250-unit community in Haines City this year and sold out of the first 24 townhome phase in a similar space of time.”

New property listings rise 7.1% as homeowners feel the time is right to sell