On Friday at the 13th edition of The Quail a Motorsports Gathering took place in the picturesque setting of California’s Carmel Valley celebrating the allure and magnetism of the motoring world.

Racing legends Jochen Mass, Derek Bell and Jackie Stuart joined motoring heavyweights including Torsten Muller-Otvos, CEO of Rolls Royce and Maurizo Parlato, COO of Bugatti of Americas to celebrate the awards announcement and view the world’s rarest and most prized vintage and supercars on display.

The event made a fitting backdrop for the global announcement of The Peninsula Classics Best of the Best Award, a new global award launching next year which honours the most exceptional classics in the world from six of the best automobile events including Pebble Beach, The Quail and Courcours of Elegance Edinburgh. The official announcement was given by The Hon. Sir Michael Kadoorie, Chairman of The HongKong and Shanghai Hotels Limited alongside co-founders Christian Philippsen and William E. “Chip” Connor. 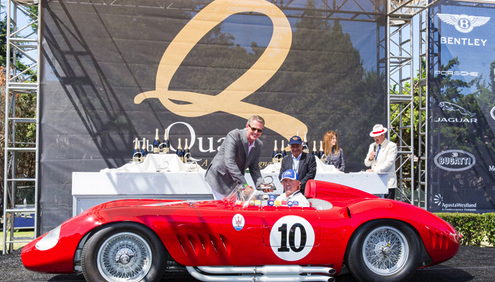 The Quail, A Motorsports Gathering is renowned as the home of the Bonhams Quail Lodge Auction, where some of the world’s most sought-after motorcars command record prices. In 2014, Bonhams shattered a world record with the record-making sale of a 1962 Ferrari 250 GTO at $38 million, making it the most valuable car to ever be sold at auction. This year, Bonhams’ enjoyed repeat success with over 88% of lots sold reaching a collective US$45 million. Key items included The ‘Interim’ 250 GT SWB Competizione ($8.53m) the 212 Inter Cabriolet ($2.2m) and the 288 GTO ($2.37m).

B Roll footage of the event including interviews with notable guests, is available below free of charge and free from copy right restrictions.

About The Quail Rally and Motorsports Gathering

Conceived by The Peninsula Hotels over 13 years ago, and stylishly executed by Peninsula Signature Events, The Quail, A Motorsports Gathering celebrates the allure and magnetism of the motoring world, with over 200 rare motor vehicles on display, impeccable food and wine, and Bonhams Quail Lodge Auction, where some of the world’s most sought-after motorcars command record prices.

About The Peninsula Signature Events

Natural rehab in your kitchen

Win a holiday to Essaouira!

3 Tips to prevent you from feeling sluggish in the morning