The underemployment rate (which includes people who have given up looking for work and people who have part-time jobs but want full-time jobs) actually jumped in October to 13.8%—it stood at 13.6% in September!

Jobs which provide a decent salary didn’t see much growth from what we can see in the October jobs market report. Jobs in the traditional high-paying construction, mining/logging, wholesale trade, transportation/warehousing, information, and financial sectors lagged and showed next to no change in growth in October.

The table below, which I have created for my readers, shows the change in manufacturing employment in the U.S. economy since February 2013. So far, until this past September, 2,000 manufacturing jobs were wiped out this year. 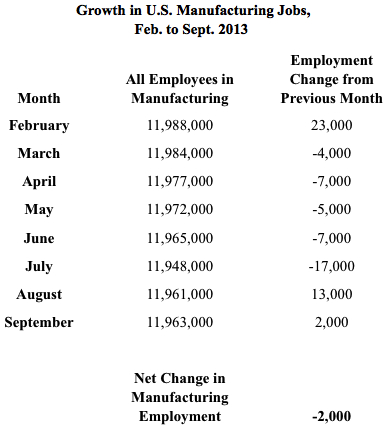 The final troubling fact about the U.S. jobs market that no one wants to talk about is that in October, the civilian labor force (all workers in the U.S. economy) declined by 720,000! The labor force participation rate declined by 0.4% and stood at 62.8%. This is troublesome at the very core; it shows less and less Americans are working.

Dear reader, the jobs market report for October has strengthened my argument that the U.S. economy is far from seeing any economic growth. Looking at this jobs market report, which I’m sure the Federal Reserve is analyzing very closely, it only makes the Fed’s decision not to start tapering (not to pull back on monthly paper money printing) even stronger.

This article The Worst Jobs Report of the Year Just Announced? is originally publish at Profitconfidential

HSBC supports those affected by floods