Yet again millions of adoring Brits tune into watch X Factor, the talent show to end all talent shows whilst being blissfully unaware of the implications.

There is no need to mention any act in particularÂ or pass crude judgement upon the individuals who partake in the national experience because that is ground well trodden.

Instead it is time to sit back and question why such talent shows are so popular.

It would be totally wrong toÂ assumeÂ that X Factor is a new phenomenon seeing as talent shows are as old as the hills, but the scale of the talent show has changed and theÂ methodologyÂ of discerning talent has been narrowed down to fit in with a very specific criteria to amuse the masses whilst stripping the creativity from the artists.

Time and time again creative individuals have popped up on X Factor only to be moulded by the 'judges' into a soulless performance monkey to test their commercial viability as opposed to nurturing their raw talent.

Yet the public lap it up thanks to the presentation of the program thatÂ pre-emptsÂ the suggestion of infallibilityÂ towards the judgesÂ decisions leaving little inÂ theÂ way of trueÂ discernmentÂ on the part of the viewer, who will find themselves questioning their own opinion because the judge knows best.

The X Factor judges emerge into shot in slow motion as if they have just left the pantheon of the gods to impart their feckless opinion upon aÂ subservient audience.

Most seriousÂ musicalÂ artists Â worth their salt will reject the X Factor as being the work of the devil and for good reason.

The furious plethora of trueÂ artists acrossÂ theÂ country sit in disgust as they watchÂ theÂ charts become dominated with meaningless, formulated Â songs composed and produced to appeal to a stagnant mass market of mindless zombies crying out for the next flash inÂ theÂ pan.

This woollen andÂ repetitive event has all the markings of the most negative aspects ofÂ tribalism with the audience expecting humiliation to satisfy some cruel andÂ insidiousÂ inner part of the human psyche just as the gladiatorial games of old.

And indeed X Factor is the bread and circuses of the 21st century which would make the Roman's expertise atÂ subduingÂ the masses through distraction pale into insignificance with this modern massÂ psychologicalÂ  manipulation national event.

It is time for the nation to awaken to the absurdity that passes at family entertainmentÂ and demand more from the broadcast companies.

The best form of protest is to turn off the television for week and try to persuade friends and family to do the same regardless of if you are the only people in Britain doing so.

At worst the outcome will be the ability to distance oneself from the mass media and all it's ills.

Vive la revolution or vive Lacoste, the choice is yours. 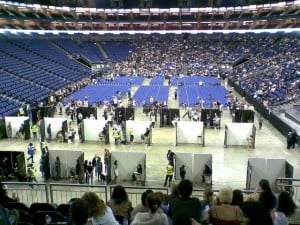