‘The Yasuni Project: Protecting the rainforests and fighting climate change’

THE GREEN Party is excited to announce a special session “The Yasuni Project” at its spring conference; a fringe event hosted by Dr. Derek Wall in conjunction with the Ecuadorian Embassy.

The Yasuni Project was launched by the government of Ecuador in 2007, and aims to keep a portion of Ecuador’s vast oil reserves underground in order to conserve the rainforests and the livelihoods of the indigenous population.

The event will feature Daniel Ortega-Pacheco, the current Ministerial Advisor in the Ecuador Ministry of Foreign Affairs, and former Ecuadorian Director of Environment and Climate Change, as a guest speaker.

Dr. Derek Wall, Green Party international coordinator, said: “With international agreements to cut carbon emissions stalling, the Yasuni project is the most radical alternative, and a sign of hope.”

“The idea is simple, brilliant and inspiring.Â  The Yasuni national park, home to several indigenous groups and much biodiversity, sits on a huge oil deposit.Â  In return for international aid the Ecuadorian government will preserve the Amazon forest covered by the park from all oil exploration.

“While it would be more economic to simply drill for oil, Ecuador is committed to trying to avoid doing so.Â  I can't think of another country in the world that is refusing to drill for oil; being out of pocket is less important than doing the right thing for future generations and the rainforest.

“Ecuador is the only country in the world that is actively seeking to stop increased carbon dioxide production. Expanding renewables is essential but policies designed to keep oil and other fossil fuels in the ground while raising economic development to reduce poverty are also paramount.

“Ecuador is a pioneer in this respect and we are lucky to have Daniel Ortega-Pacheco as a speaker, who is one of the country’s top climate policy experts. Green Party members will have the opportunity to discuss this exciting project and to learn how a green economy can be built.”

The Yasuni Project: Protecting the rainforests and fighting climate change will be on Sunday 24th February from 1330-1445 in room 3A of the East Midlands Conference Centre, Nottingham. 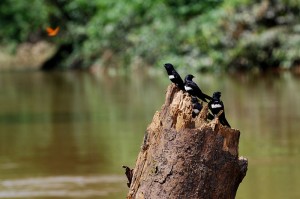 Image by Geoff Gallice from Gainesville (Eye on the prize Uploaded by Snowmanradio) [CC-BY-2.0 (http://creativecommons.org/licenses/by/2.0)], via Wikimedia Commons

The calm before the storm continues…..