Chris Cummings, Chief Executive of TheCityUK, said: “We very much welcome the Prime Minister’s commitment to British and European competitiveness, and his recognition of the importance of Britain’s role in the Single Market. We need to focus on the facts, not act sentimentally, to secure the future prosperity of the UK, and also the EU.

“Business is mobile, and international firms need to be confident of our future within the Single Market. Our recent Competitiveness Report found that 40% of financial services firms choose the UK as a place to set up and grow their business because of our access to the EU.

“The UK benefits from trade agreements negotiated by the EU with countries such as the US, Japan and India, but there is still more to be done. We are pleased that the Prime Minister is committed to completing the Single Market. Britain must play its full role in ending existing non-tariff barriers and resisting policies that prejudice the integrity of the Single Market and Europe’s openness to global trade.

“The Prime Minister is also right to think about the impact of these issues on Britain’s influence at the top table of international affairs. The UK is more influential because of its role in the European Union. 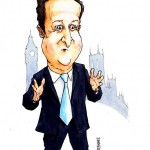 “It is also important that the Prime Minister has recognised the importance of the UK’s financial and professional services sector. The sector employs millions of people in the UK, accounts for nearly 15% of our national wealth, contributes tens of billions in taxes and provides a bigger trade surplus than any other sector. Its future must be taken seriously.”

"Uncertainty is bad for business and bad for the economy.Â  It is good that the Prime Minister is gripping the issue and seeking a constructive and continued engagement with Europe. We will be working with the Government to put the facts on the table and to emphasise the importance of London maintaining its position as the EU's financial capital."

Pound and Euro consolidate despite talk of doom and gloom