Speaking in the House the Home Secretary, Theresa May, told MPs that the government plans to exercise its right to opt out of 130 EU law measures.

This would include the EU dropping the controversial EU Arrest Warrant procedure, which the Tory’s coalition partners, the LibDems, backed at the last election. In some cases the EU Arrest Warrant has proved very costly for the UK, but it was recently very successfully used to repatriate a 15 year old schoolgirl and the teacher who took her over the Channel to France.

Under the opt out agreement with the EU the UK will have to opt out of all 130 measures totally and then negotiate to opt back in to the provisions it wishes to engage in.

The Home Secretary’s fellow MPs have backed her but the Commission and her opponents are not so happy.

The UKIP leader, Nigel Farage, called the Home Secretary a ‘modern day Grand Old Duke of York’ saying that she wants to opt out then opt in and, at the end of the day, very little would probably really change anyway.

The EU Commission said that this move did not come as a surprise and that it would have to assess the position as it developed.

This will obviously upset the Tory’s coalition partner and will end up taking up a lot of parliamentary time. Then, unless the Conservatives win the next election, one supposes that we could end up with a government committed to opting in fully again, especially if the LibDems hold the coalition ace with a Labour government. But that’s politics for you, just keep paying the taxes. 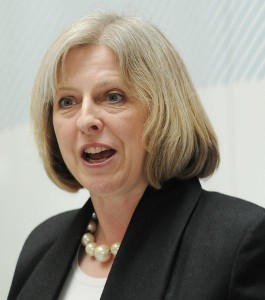