“Theresa May once famously warned her conference about being the Nasty Party. Today, it sounded like she forgot her own advice. In her desperation to boost her stock amongst the Tory faithful, the Home Secretary delivered a misleading and narrow-minded speech which fails to provide any real answers to the challenges we face."

“Labour shares the Home Secretary's concerns about the under-cutting of wages and stands ready to work with her on securing new EU rules to prevent it. But to claim against the weight of evidence that the economic benefit of migration is 'close to zero' is to pander to the right-wing of the Tory Party. People look to the Home Secretary to provide balance and leadership on these difficult issues but she has signally failed to do that today. 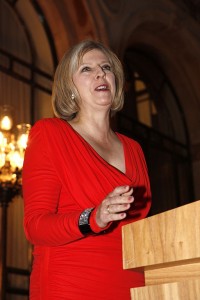 “This isn't the first time that people have heard Theresa May talk tough on immigration so they will be entitled to take today's overblown rhetoric with a pinch of salt. She promised to get net migration down but it has risen to record levels on her watch and nothing she has announced will change that.

“On the refugee crisis, it is clear that the Home Secretary continues to refuse to face to the scale of what is unfolding in Europe. While she is right to stay outside any formal EU quota scheme, she should still be offering help to our neighbours who are struggling to cope.

“What was perhaps most striking about the Home Secretary's speech was the complete absence of any mention of the challenges facing our police service. With some forms of crime starting to rise and police numbers falling, people were looking for reassurance from the Home Secretary that she will do everything she can to maintain community safety and protect front-line policing in the current spending review. Her failure even to mention these crucial issues will strike a demoralised service as ominous and only heighten public concern about what lies ahead for the Police.”

Britain now not so isolated in the EU