These Value and Growth Stocks Could Outperform the Bull Market

When it comes to building a balanced portfolio, investors like to find stocks that provide both value and growth. If you're a value investor, you're always on the lookout for companies that are cheap relative to their earnings, assets, or price-to-book value; in other words, they look for what's undervalued.

A growth investor, on the other hand, likes to look at publicly traded companies that are in a position to rapidly increase their revenues and profits; they want stocks with excellent long-term growth potential. This could include those stocks that have provided revenue and earnings guidance that is expected to outperform the market or industry.

While sticking with one strategy over the other can work, it can also lead to lurching gains when your investment strategy hits economic headwinds. However, combining both strategies can produce more consistent returns.

But if profitable investing really was that easy, everyone would be following this investment strategy, which means no one would be making money.

The fact of the matter is that in this economic environment, it's pretty tough to find unloved, overlooked value and growth stocks. That's because virtually everything is going up.

The S&P 500 is up 26% year-to-date and 15% since its pre-Great Recession high. Not to be outdone, the Dow Jones Industrial Average is up more than 21% since the beginning of the year and up roughly 13% from its pre-recession high. The NASDAQ is hands down the top performer so far this year, up 30% since January 2 and more than 40% since peaking in 2007.

In a bull market where it seems like everything is going up, it's getting increasingly tougher to find stocks on the S&P 500 and exchange-traded funds (ETFs) that appeal to both bargain hunters and growth gurus.

Or rather, it's getting tougher to find stocks that have a legitimate chance to make solid gains in both the current artificially low interest rate environment and the one that includes any tapering of the Federal Reserve's $85.0-billion-per-month quantitative easing strategy.

Let's also not forget the ability of a company to grow in the lengthening shadow of tepid economic growth. An increasingly large number of companies on the S&P 500 have been revising their quarterly earnings lower. So far, 92 (89%) of the S&P 500 companies have already issued negative earnings guidance for the fourth quarter. 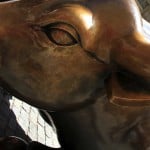 No matter how you slice it, the Wall Street prognosticators are predicting the S&P 500 will continue to notch up its record highs for at least the next two years. That still means it will continue to be difficult to find value and growth stocks.

This article These Value and Growth Stocks Could Outperform the Bull Market by John Paul Whitefoot, BA was originally published at Daily Gains Letter