Right-minded parents should be very worried by this European Union project to promote itself to children. Even if you are pro-EU you should be concerned that such techniques can be used on minors; consider, the next time the subject matter being advanced may not be so much to your liking.

There are reports that Brussels has produced a series of comic books designed to put the case for the European Union to school children.

But pushing this one sided story onto developing minds of how wonderful the Common Agricultural Policy, the EU Commission and open borders are, is not education it is downright brainwashing.

A prime example of this is one comic entitled ‘The Road to Victory’ about a group of international students from Bratislava who embark on ‘an adventure-packed school trip across Europe’. In it the socialist ideals are pushed – a teacher replies to a student’s negative questioning of the EU budget with the answer "What we have to remember is that money that countries invest in the European Union is more useful to all its citizens than if each country spent it individually."

But the focus changes, on its travels the group visit a fictional theatre in Hungary that was the recipient of EU funding as well as a hospital in France with a cancer wing with the money supposedly coming from the EU.

Where is the balance required by modern educational systems? Why not use real examples also showing some failed projects and how much money was wasted? 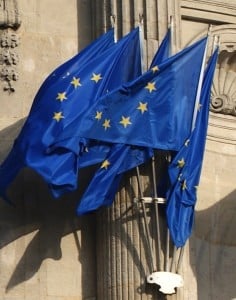 For a start the EU and the Commission have no money of their own, it all comes from the member states. Although reference is made to states paying in, all the subsequent benefits seem to be portrayed as if the money magically comes free from the wonderful EU. Where is reference to where the money really comes from? Which countries are net givers and which net receivers? Therefore to where the appreciation should be truly attributed. Now that would be an education.

Where are they told that funding their little trip could mean the shutting down of an old peoples’ home in another country?

Where are the counter arguments about the state of Greece or other countries in the EU Southern regions?

Where are they told that some areas and people in the EU will get richer and richer whilst others will wither on the vine, sacrificed at the altar of ‘ever-closer union’?

There are also other comic books:

• And ironically one about the £6 billion European Social Fund, designed to deal with EU youth unemployment. Wonder how that would go down in Spain or Greece I wonder?

This is meant to engender ‘participation in democratic life’ according to one EU spokesperson who went on to say 'Young people represent the future, and it is therefore of prime importance that they are informed about what the EU is, what it does and why it is important, in their own language.'

Well I beg to differ, this is not teaching children about democracy. It is an unbalanced and repellent attempt to place young minds unquestioningly on the rails of accepted pro-EU thinking.

This is not just a waste of public money, this project is a criminal misuse of taxpayers’ funds and it should be terminated immediately. After all Section 406 of the Education Act 1996 forbids it.

Free banking – is this really the end of it?