The London Symphony Orchestra, with its Principal Conductor Valery Gergiev and violinist Nicola Benedetti, performed to a capacity crowd of Londoners and visitors of all ages on the evening of Sunday 17 May in the striking setting of London’s Trafalgar Square.

The concert, free and open to everyone, was the fourth annual concert in the BMW LSO Open Air Classics series, the result of a unique partnership between the LSO and BMW.

The LSO performed music by Shostakovich: his Symphony No. 1, Festive Overture, and two movements from his Violin Concerto No 1, with the captivating, young violinist Nicola Benedetti as soloist. Some of Shostakovich’s jazz suites, in a special arrangement by Gareth Glyn, were also performed, with members of the LSO joined on stage by young musicians from East London (members of the LSO On Track scheme) and musicians from the Guildhall School of Music & Drama. LSO On Track is an initiative for young instrumentalists from across the ten East London boroughs, who are coached and trained by LSO players, and given exciting performance opportunities like this.

The event was presented by Paul Rissmann who, along with the LSO’s percussion section and the young musicians from LSO On Track, encouraged the whole audience to join in with a performance of Shostakovich’s The Gadfly, using a rhythm based thigh-slapping and clapping routine, demonstrated from the stage. Large screens mounted on either side of the stage, and towards the back of Trafalgar Square enabled the whole audience to witness the concert close up. 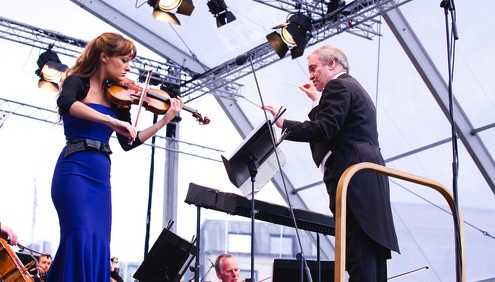 Study of Russia exhibition at Asia House in London