David Robinson-Young is now extremely concerned about his personal safety after receiving a telephone call from an irate constituent complaining about the bombing of the "Moslem brotherhood" in the Middle East.

He described himself as Mr Khan and said he lived in the South Gosforth area of and had received a leaflet from Mr Robinson-Young that morning.

"He said the Muslim community is really annoyed with the British government supporting bombing Muslim countries and that the community here just wants to get on with their family lives," said Mr Robinson-Young.

After listening patiently to the man for about 20 minutes Mr Robinson-Young said he was unhappy about his shouting and asked him to calm down or otherwise the call would have to be terminated unless he stopped.

"Mr Khan then swore at me saying, 'you had better f… off or you will be beheaded next.' 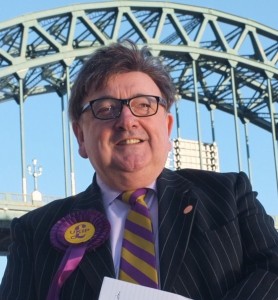 "After the terrible Lee Rigby incident I am very concerned about this threat, particularly at this time in an election campaign," said Mr Robinson-Young, who is contesting the parliamentary seat of Newcastle East.

Ironically Mr Robinson-Young is a barrister specialising in discrimination and employment law and has acted for Muslims who have been discriminated against.

"This caller was ranting on and on saying that the government supports bombing "my Muslim brothers" abroad.

"UKIP does not support getting involved in wars in the Middle East and that is something I pointed out at a hustings in a synagogue hall in Gosforth the previous evening.

"If he had let me answer his questions I would have told him that I am the former legal officer for the Race Equality Office in Newcastle upon Tyne as well as working on behalf of Muslims many times."

Mr Robinson-Young said today, "I'm not a man who is easily intimidated, I’m an ex-policeman and I’ve been subjected to numerous physical threats in the past. I left the police service because of injuries received in an assault on duty.

"I found this man’s threats to be particularly chilling and it as really shaken me. However I will not let this incident prevent me from continuing in the campaign to try and change our country for the better."