Almost three in ten remortgagors now believe interest rates are going up, according to findings from LMS.

A customer survey reveals that the number of remortgagors who anticipate rate rises has increased significantly in the last six months, from 16% in February to 28% in August; and 6% up from July’s 22%.

In contrast, just 2% of remortgagors believe interest rates will decrease, a drop of 2% from 4% in July.

The assumption interest rates will rise is driving remortgage activity among borrowers keen to take advantage of record-low rates before a hike, with lending up 20% year-on-year in August to £4.2bn. 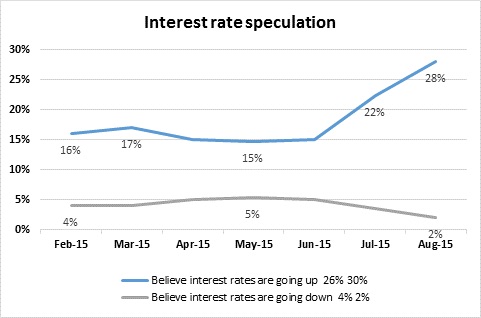 Just 3% of remortgagors were incentivised to stay by their lenders, while 76% opted to switch.

Of those increasing the size of their loan, more than one in four (28%) chose to remortgage to spend on home improvements, while six in 10 (60%) opted to pay off debts. A small percentage also used the additional cash to help a child buy a property.

“Competitive offers and the threat of a base rate rise continues to drive remortgaging activity as winter approaches, even though an increase before the end of the year now appears unlikely.

“That said, it is better for borrowers to take the necessary measures in good time rather than be caught off guard when rates do rise. Consumers are certainly abreast of base rate speculation as it becomes am increasingly common topic of discussion. It remains worrying that we have a new generation of borrowers who have not experienced anything other than record-low rate mortgages who may be ill-placed to adjust when rates do rise, but hopefully the affordability requirements within the Mortgage Market Review will lessen this impact.

“This is all the more reason for potential remortgagors to take charge of their finances before any increase burns a hole in their pockets, and explore the myriad of competitive deals available in the market before they’re withdrawn by lenders.”