Over three million signatures from across Europe calling for TTIP to be scrapped were submitted to representatives of the European Commission in London at 11.30 am this morning, in the shadow of a 6 metre high inflatable TTIP Trojan Horse. The Trojan Horse symbolised that while TTIP is presented as a 'trade deal,' critics argue that it actually constitutes an unprecedented corporate power grab. Over 500,000 of the sgnatures that were submitted came from people who were resident in the UK.

The petition was being delivered at almost exactly the same time that David Cameron was making a speech at the Conservative party conference in which he defended TTIP as a vote winner and talked about the UK's role in instigating the trade deal.

The petition, which was initiated by a coalition of NGOs, trade unions and consumer groups from across Europe, had originally been intended to act as a European Citizens Initiative, a formal mechanism whereby a petition with a million signatures from seven or more EU states can force the Commission to formally respond to their request and hold a public hearing in the European parliament. In September 2014 campaigners accused the Commission of attempting to ‘stifle democracy’ after it had ruled the TTIP petition to be invalid on a technicality – a move which is currently being challenged in the European Court of Human Rights. 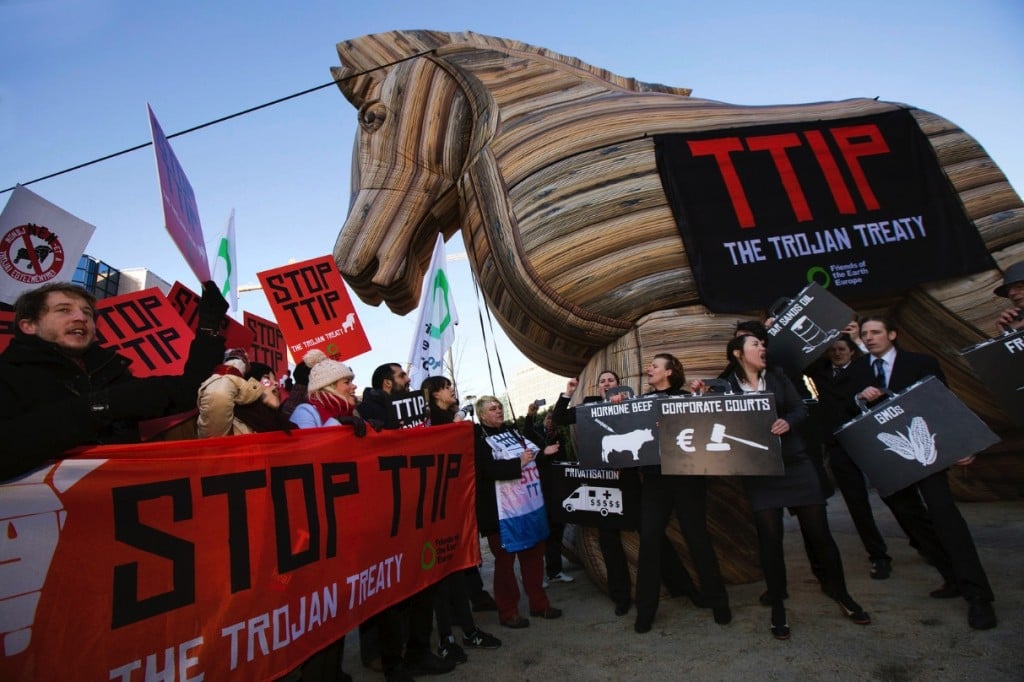 "The fact that David Cameron has been forced to be so defensive about TTIP at the Conservative party conference is indicative of how sustained public pressure has transformed these obscure initials into a source of massive political controversy.

"Three million people demanding an end to the TTIP negotiations shows that the EU does not have the public mandate to continue this deal. People across Europe are standing up to protect our labour rights, our environmental standards and vital public services, like the NHS, from TTIP.  Everything that we know about this secretive trade deal shows that it is very little about trade and very much about enshrining a massive corporate power grab.”

The TTIP negotiations have become increasingly controversial in many different countries. Last week the French trade minister threatened to “call a complete halt” to the process if things didn’t change, saying that the “total lack of transparency” posed a threat to democracy. There has been no scrutiny of the deal from elected representatives in the UK parliament who are not allowed to see the draft texts. UK representatives will only see the deal when it has been complete and will get a vote to accept or amend without amendments.

On Saturday, 10 October,  the Shadow Chancellor of the Exchequer, John McDonnell MP, will be addressing a ‘No TTIP’ rally in London at Conway Hall, organised by Global Justice Now, War on Want and Friends of the Earth, speaking alongside Green Party leader Natalie Bennett and actor Juliet Stevenson.

The petition was handed in in London by representatives of Global Justice Now, Friends of the Earth, War on Want, Restless Development and Youth Stop Aids.