When I’m looking at the screens each day, I notice there’s some selling capitulation occurring that makes me think back to 2000, when the technology stocks imploded.

Now, while I doubt we are seeing a repeat of 14 years ago, you have to wonder about the mad dash to the exits for many of the high-momentum technology stocks along with small-cap stocks.

The small-caps are under threat, with the Russell 2000 down nearly eight percent in 2014 so far and close to five percent in April alone. Watch as the index is just above its 200-day moving average (MA) in the chart below.

As I said last week, the fact that the NASDAQ and Russell 2000 have failed to recover their respective 50-day MAs is a red flag, based on my technical analysis. Moreover, the presence of a possible bearish head-and-shoulders formation on the NASDAQ chart is concerning for technology stocks.

The lack of any leadership from technology stocks now, which was so prevalent in 2013, has also hurt the broader stock market.

On the charts, only the S&P 500 is positive in 2014, with a slight advance. All of the key stock indices were negative in April—a month that has historically been positive.

To make matters worse, we are heading into traditionally the worst six-month period for the stock market, from May to October, so it’s not going to get easier anytime soon.

The fact that numerous technology stocks have produced some strong earnings results is encouraging, but the lack of strong follow-through buying is a concern and suggests some exhaustion towards technology stocks. 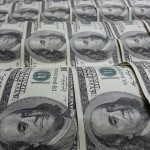 We also have the uncertainty and risk of the Ukraine/Russia situation. Should a war surface, it would be enough to trigger a sell-off in not only European bourses, but also stock markets around the world. To hedge against this, you could add some gold investments to your portfolio, such as the SPDR Gold Shares (NYSEArca/GLD) exchange-traded fund (ETF).

But there are also other trading strategies that come to mind.

If the Russell 2000 breaks below its 200-day MA, you could consider adding an ETF like iShares Russell 2000 (NYSEArca/IWM) as a play on a possible bounce in the small-cap stocks.

Also, with the uncertainties of which direction the stock market will move, you could consider initiating a long straddle option trade on an index like the S&P 500. This trade simply means you would buy a similar call and put option, with the same strike and expiry on the index. If the call or put makes a major move in either direction, you would likely make money after accounting for the premium paid to establish the trade.

This article Three Ways to Profit from an Exhausted Stock Market was originally published at Daily Gains Letter.

The Tobacco Industry and Electronic Cigarettes