With higher living standards comes an increase in the so-called 'lifestyle diseases' as Tibetans are now finding out to their cost.
In the past Tibetans have mostly suffered from poverty related diseases such as smallpox, typhoid, cholera, and tetanis as well as iodine deficiency. They had though managed to just about wipe these diseases out by the 1950s.

Now though, with an improved lifestyle more associated with the west, xinhuanet.com reports that many Tibetans are overeating leading to different medical problems like diabetes, gout and hyperlimia. But these diseases are almost unknown to Tibet and there are no traditional remedies for them.

Trangjo, the deputy director of the physical examination centre of the People's Hospital of the Tibet Autonomous Region, is quoted as saying that 'The number of people caught by lifestyle diseases in Tibet has increased very quickly over the past five years.' And that 'The patients are mostly between 30 to 45 years of age'.

'Higher living standards and better medical services have reduced the incidence of traditional diseases but also led to new ones.' He also said.

Trangjo pointed out that seafood, as a relative newcomer to the general Tibetan diet, is causing problems for eaters in the form of increased levels of gout.

In an attempt to counter this problem many Tibetans are returning to their more traditional fare, such as Tsampa. 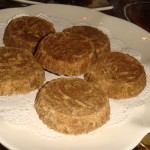 Tsampa is a staple food in Tibet made of roasted barley flour and yak butter tea. The way of eating it, according to Wikipedia, is by leaving a small amount of buttered tea in a bowl then kneading the roast barley flour into it by hand, twisting and kneading until you have a small dumpling, which you eat while drinking more tea. By all accounts, until you are practiced and get the consistency just right, it can be a messy experience.

Those in countries who have been economically developed for longer should take heed of this Tibetan experience and review their diets. The World Health Organisation estimates that 2.6 million people in the UK suffer from the disease, that's a hefty number. But it seems that some of this could be addressed purely by a change in our diet and some regular exercise.

Don't you owe it to yourself to maybe take a leaf out of the Tibetans' book and review what you are drinking and eating as well as joining that gym?

How to rescue a dying garden in an innovative way

Top 10 destinations families will be visiting this bank holiday

Caught up in BA Delays and Wondering What Your Rights Are?